Time-Travel Adventure to Save the Life of Doctor Who 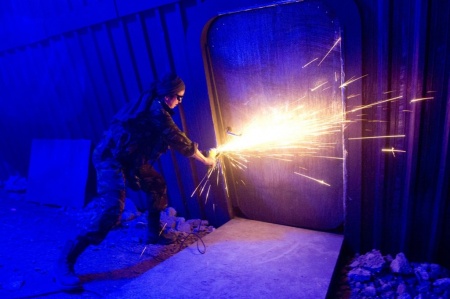 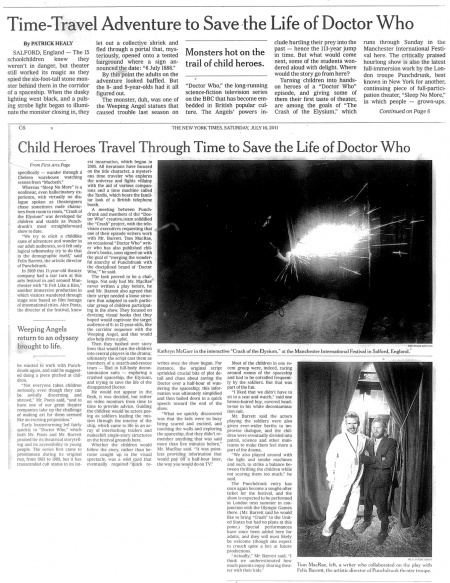 Monsters hot on the trail of child heroes.

SALFORD, England — The 15 schoolchildren knew they weren't in danger, but theater still worked its magic as they spied the six-foot-tall stone monster behind them in the corridor of a spaceship. When the dusky lighting went black, and a pulsing strobe light began to illuminate the monster closing in, they let out a collective shriek and fled through a portal that, mysteriously, opened onto a tented fairground where a sign announced the date: "6 July 1888."

By this point the adults on the adventure looked baffled. But the 8- and 9-year-olds had it all figured out.

The monster, duh, was one of the Weeping Angel statues that caused trouble last season on "Doctor Who," the long-running science-fiction television series on the BBC that has become embedded in British popular culture. The Angels' powers include hurtling their prey into the past — hence the 113-year jump in time. But what would come next, some of the students wondered aloud with delight. Where would the story go from here?

Turning children into hands-on heroes of a "Doctor Who" episode, and giving some of them their first taste of theater, are among the goals of "The Crash of the Elysium," which runs through Sunday in the Manchester International Festival here. The critically praised hourlong show is also the latest full-immersion work by the London troupe Punchdrunk, best known in New York for another, continuing piece of full-participation theater, "Sleep No More," in which people — grown-ups, specifically — wander through d Chelsea warehouse watching scenes from "Macbeth."

Whereas "Sleep No More" is a nonlinear, even hallucinatory experience, with virtually no dialogue spoken ..as theatergoers chase sometimes nude 'characters from room to room, "Crash of the Elysium" was developed for children and stands as Punch-drunk's most straightforward show to date.

"We try to elicit a childlike state of adventure and wonder in our adult audiences, so it felt only logical tollsomeday try to do that in the demographic itself; said Felix Barrett, the artistic director of Punchdrunk.

In 2009 this 11-year-old theater company had a star turn at this arts festival in and around Manchester with "It Felt Like a Kiss," another immersive production in which visitors wandered through stage sets based on film footage of international cities. Alex Pools, the director of the festival, knew he wanted to work with Punchdrunk again, and said he suggested doing a piece pitched at children.

"Not everyone takes children seriously, even though they can be awfully discerning and shrewd," Mr. Pools said, "and to have one of our great theater companies take up the challenge of making art for them seemed like an exciting proposition." Early brainstorming led fairly quickly to "Doctor Who," which both Mr. Pools and Mr. Barrett praised for its theatrical storytelling and its accessibility to young people. The series first came to prominence during its original run, from 1963 to 1989, but it has transcended cult status in its latest incarnation, which began in 2005. All iterations have focused on the title character, a mysterious time traveler who explores the universe and fights villainy with the aid of various companions and a time machine called the Tardis, which bears the familiar look of a British telephone booth.

A meeting between Punchdrunk and members of the' "Doctor Who" creative team solidified the "Crash" project, with the television executives requesting that one of their episode writers work with Mr. Barrett. Tom MacRae, an occasional "Doctor Who" writer who has also published children's books, soon signed on with the goal of "merging the wonderful anarchy of Punchdrunk with the disciplined brand of 'Doctor Who,'" he said.

The task proved to be a challenge. Not only had Mr. McRae never written a play before, he and Mr. Barrett also agreed that their script needed a loose structure that adapted to each particular group of children participating in the show. They focused on devising visual hooks that they hoped would captivate the target audience of 6- to 12-year-olds, like the corridor sequence with the Weeping Angel, and that would also help drive a plot.

Then they hashed over story lines that would turn the children into central players in the drama; ultimately the script cast them as members of a search-and-rescue team — bed in full-body decontamination suits — exploring a crashed spaceship, the Elysium, and trying to save the life of the disappeared Doctor.

He would not appear in the, flesh, it was decided, but rather on video monitors from time to time to provide advice. Guiding the children would be actors posing as soldiers leading the mission through the interior of the ship, which came to life in an array of interlocking trailers and makeshift single-story structures on the festival grounds here.

Whether the children would follow the story, rather than become caught up in the visual spectacle, was a wild card that eventually required quick rewrites once the show began. For instance, the original script sprinkled crucial bits of plot detail and clues about saving the Doctor over a half-hour of wandering the spaceship; this information was ultimately simplified and then boiled down in a quick speech toward the end of the show.

"What we quickly discovered was that the kids were so busy being scared and excited, and touching the walls and exploring the spaceship, that they didn't remember anything that was said more than five minutes before," Mr. MacRae said. "It was pointless providing, information that would pay off a half-hour later, the way you would do on TV."

Most of the children in one recent group were, indeed, racing around rooms of the spaceship and had to be corralled frequently by the soldiers. But that was part of the fun.

"I liked that we didn't have to sit in a seat and watch," said one brown-haired boy, covered head-to-toe in his white decontamination suit.

Mr. Barrett said the actors playing the soldiers were also given ever-wider berths to improvise dialogue, and the children were eventually divided into patrol, science and other mini-teams to make them feel more a part of the drama.

"We also played around with the light and smoke machines and such, to strike a balance between thrilling the children while not scaring them too much," he said.

The Punchdrunk entry has once again become a sought-after ticket for the festival, and the show is expected to be performed in London next summer in conjunction with the Olympic Games there. (Mr. Barrett said he would like to bring "Crash" to the United States but had no plans at this point.) Special performances have since been added here for adults, and they will most likely be welcome (though aim expect to crouch quite a lot) at future productions.

"Actually," Mr. Barrett said, "I think we underestimated how much parents enjoy sharing theater with their kids."

Caption: Kathryn McGarr in the interactive "Crash of the Elysium," at the Manchester International Festival in Salford, England.

Caption: Tom MacRae, left, a writer who collaborated on the play with Felix Barrett, the artistic director of Punchdrunk theater troupe.