Time to say goodbye to the Daleks 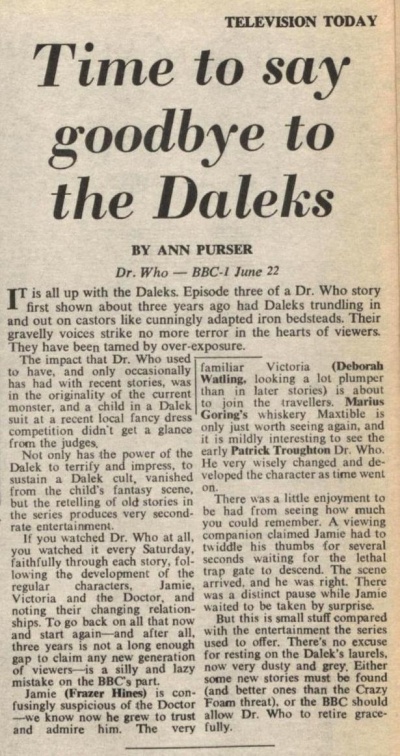 IT is all up with the Daleks. Episode three of a Dr. Who story first shown about three years ago had Daleks trundling in and out on castors like cunningly adapted iron bedsteads. Their gravelly voices strike no more terror in the hearts of viewers. They have been tamed by overexposure.

The impact that Dr. Who used to have, and only occasionally has had with recent stories, was in the originality of the current monster, and a child in a Dalek suit at a recent local fancy dress competition didn't get a glance from the judges.

Not only has the power of the Dalek to terrify and impress, to sustain a Dalek cult, vanished from the child's fantasy scene, but the retelling of old stories in the series produces very second-rate entertainment.

If you watched Dr. Who at all, you watched it every Saturday, faithfully through each story, following the development of the regular characters, Jamie, Victoria and the Doctor, and noting their changing relationships. To go back on all that now and start again—and after all, three years is not a long enough gap to claim any new generation of viewers—is a silly and lazy mistake on the BBC's part.

Jamie (Frazer Hines) is confusingly suspicious of the Doctor —we know now he grew to trust and admire him. The very familiar Victoria (Deborah Watling, looking a lot plumper than in later stories) is about to join the travellers. Marius Goring's whiskery Maxtible is only just worth seeing again, and it is mildly interesting to see the early Patrick Troughton Dr. Who. He very wisely changed and developed the character as time went on.

There was a little enjoyment to be had from seeing how much you could remember. A viewing companion claimed Jamie had to twiddle his thumbs for several seconds waiting for the lethal trap gate to descend. The scene arrived. and he was right. There was a distinct pause while Jamie waited to be taken by surprise.

But this is small stuff compared with the entertainment the series used to offer. There's no excuse for resting on the Dalek's laurels. now very dusty and grey. Either some new stories must be found (and better ones than the Crazy Foam threat), or the BBC should allow Dr. Who to retire gracefully.