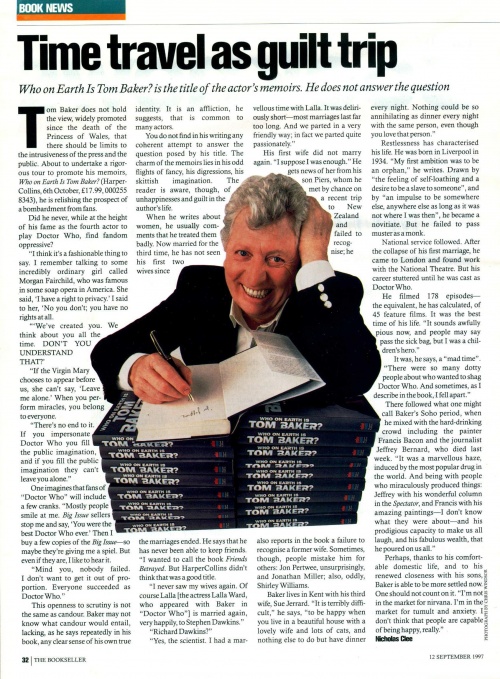 Who on Earth Is Tom Baker? is the title of the actor's memoirs. He does not answer the question

Tom Baker does not hold the view, widely promoted since the death of the Princess of Wales, that there should be limits to the intrusiveness of the press and the public. About to undertake a rigorous tour to promote his memoirs, Who on Earth Is Tom Baker? (Harper-Collins, 6th October, f 17.99, 000255 8343), he is relishing the prospect of a bombardment from fans.

Did he never, while at the height of his fame as the fourth actor to play Doctor Who find fandom oppressive?

"I think it's a fashionable thing to say. I remember talking to some incredibly ordinary girl called Morgan Fairchild, who was famous in some soap opera in America. She said, 'I have a right to privacy.' I said to her, 'No you don't; you have no rights at all.

"'We've created you. think about you all the time. DON'T YOU UNDERSTAND THAT?'

"If the Virgin Mary chooses to appear before us, she can't say, 'Leave me alone.' When you perform miracles, you belong to everyone.

One imagines that fans of "Doctor Who" will include a few cranks. "Mostly people smile at me. Big Issue sellers stop me and say, 'You were the best Doctor Who ever.' Then I buy a few copies of the Big Issue—so maybe they're giving me a spiel. But even if they are, I like to hear it.

"Mind you, nobody failed. I don't want to get it out of proportion. Everyone succeeded as Doctor Who."

This openness to scrutiny is not the same as candour. Baker may not know what candour would entail, lacking, as he says repeatedly in his book, any clear sense of his own true identity. It is an affliction, he suggests, that is common to many actors.

You do not find in his writing any coherent attempt to answer the question posed by his title. The charm of the memoirs lies in his odd flights of fancy, his digressions, his skittish imagination. The reader is aware, though, of unhappinesses and guilt in the author's life.

When he writes about women, he usually comments that he treated them badly. Now married for the third time, he has not seen his first two wives since

the marriages ended. He says that he has never been able to keep friends. "I wanted to call the book Friends Betrayed. But HarperCollins didn't think that was a good title.

"I never saw my wives again. Of course Lalla [the actress Lalla Ward, who appeared with Baker in "Doctor Who"] is married again, very happily, to Stephen Dawkins."

"Yes, the scientist. I had a marvellous time with Lalla. It was deliriously short—most marriages last far too long. And we parted in a very friendly way; in fact we parted quite passionately."

His first wife did not marry again. "I suppose I was enough." He gets news of her from his son Piers, whom he met by chance on a recent trip to New Zealand and failed to recognise; he

also reports in the book a failure to recognise a former wife. Sometimes, though, people mistake him for others: Jon Pertwee, unsurprisingly, and Jonathan Miller; also, oddly, Shirley Williams.

Baker lives in Kent with his third wife, Sue Jenard. "It is terribly difficult," he says, "to be happy when you live in a beautiful house with a lovely wife and lots of cats, and nothing else to do but have dinner every night. Nothing could be so annihilating as dinner every night with the same person, even though you love that person."

Restlessness has characterised his life. He was born in Liverpool in 1934. "My first ambition was to be an orphan," he writes. Drawn by "the feeling of self-loathing and a desire to be a slave to someone", and by "an impulse to be somewhere else, anywhere else as long as it was not where I was then", he became a novitiate. But he failed to pass muster as a monk.

National service followed. After the collapse of his first marriage, he came to London and found work with the National Theatre. But his career stuttered until he was cast as Doctor Who.

He filmed 178 episodes—the equivalent, he has calculated, of 45 feature films. It was the best time of his life. "It sounds awfully pious now, and people may say pass the sick bag, but I was a children's hero."

It was, he says, a "mad time". "There were so many dotty people about who wanted to shag Doctor Who. And sometimes, as I describe in the book, I fell apart." There followed what one might call Baker's Soho period, when he mixed with the hard-drinking crowd including the painter Francis Bacon and the journalist Jeffrey Bernard, who died last week. "It was a marvellous haze, induced by the most popular drug in the world. And being with people who miraculously produced things: Jeffrey with his wonderful column in the Spectator, and Francis with his amazing paintings—I don't know what they were about—and his prodigious capacity to make us all laugh, and his fabulous wealth, that he poured on us all."

Perhaps, thanks to his comfortable domestic life, and to his renewed closeness with his sons, Baker is able to be more settled now. One should not count on it. "I'm not in the market for nirvana. I'm in the market for tumult and anxiety. I don't think that people are capable of being happy, really."