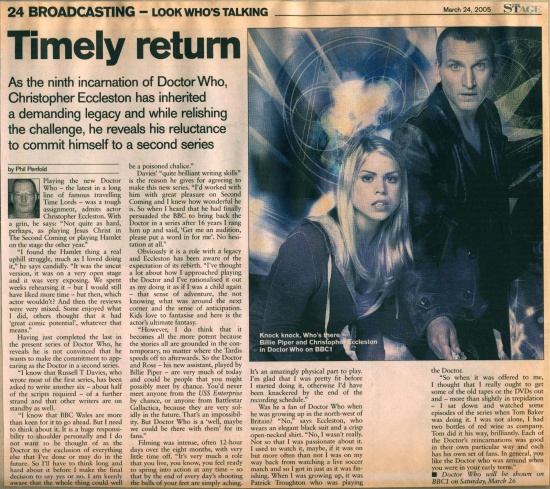 As the ninth incarnation of Doctor Who, Christopher Eccleston has inherited a demanding legacy and while relishing the challenge, he reveals his reluctance to commit himself to a second series

Playing the new Doctor Who — the latest in a long line of famous travelling Time Lords — was a tough assignment, admits actor Christopher Eccleston. With a grin, he says: "Not quite as hard, perhaps, as playing Jesus Christ in The Second Coming or playing Hamlet on the stage the other year."

"I found the Hamlet thing a real uphill struggle, much as I loved doing it," he says candidly. "It was the uncut version, it was on a very open stage and it was very exposing. We spent weeks rehearsing it — but I would still have liked more time — but then, which actor wouldn't? And then the reviews were very mixed. Some enjoyed what I did, others thought that it had 'great comic potential', whatever that means."

Having just completed the last in the present series of Doctor Who, he reveals he is not convinced that he wants to make the commitment to appearing as the Doctor in a second series.

"I know that Russell T Davies, who wrote most of the first series, has been asked to write another six — about half of the scripts required — of a further strand and that other writers are on standby as well.

"I know that BBC Wales are more than keen for it to go ahead. But I need to think about it. It is a huge responsibility to shoulder personally and I do not want to be thought of as the Doctor to the exclusion of everything else that I've done or may do in the future. So I'll have to think long and hard about it before I make the final decision to say yes or no. I am keenly aware that the whole thing could well be a poisoned chalice."

Davies' "quite brilliant writing skills" is the reason he gives for agreeing to make this new series. "I'd worked with him with great pleasure on Second Coming and I knew how wonderful he is. So when I heard that he had finally persuaded the BBC to bring back the Doctor in a series after 16 years I rang him up and said, 'Get me an audition, please put a word in for me'. No hesitation at all."

Obviously it is a role with a legacy and Eccleston has been aware of the expectation of its rebirth. "I've thought a lot about how I approached playing the Doctor and I've rationalised it out as my doing it as if I was a child again — that sense of adventure, the not knowing what was around the next corner and the sense of anticipation. Kids love to fantasise and here is the actor's ultimate fantasy.

"However, I do think that it becomes all the more potent because the stories all are grounded in the contemporary, no matter where the Tardis speeds off to afterwards. So the Doctor and Rose — his new assistant, played by Billie Piper — are very much of today and could be people that you might possibly meet by chance. You'd never meet anyone from the USS Enterprise by chance, or anyone from Battlestar Gallactica, because they are very solidly in the future. That's an impossibility. But Doctor Who is a 'well, maybe we could be there with them' for its fans."

Filming was intense, often 12-hour days over the eight months, with very little time off. "It's very much a role that you live, you know, you feel ready to spring into action at any time — so that by the end of every day's shooting the balls of your feet are simply aching. It's an amazingly physical part to play. I'm glad that I was pretty fit before I started doing it, otherwise I'd have been knackered by the end of the recording schedule."

Was he a fan of Doctor Who when he was growing up in the north-west of Britain? "No," says Eccleston, who wears an elegant black suit and a crisp open-necked shirt. "No, I wasn't really. Not so that I was passionate about it. I used to watch it, maybe, if it was on but more often than not I was on my way back from watching a live soccer match and so I got in just as it was finishing. When I was growing up, it was Patrick Troughton who was playing the Doctor.

"So when it was offered to me, I thought that I really ought to get some of the old tapes or the DVDs out and — more than slightly in trepidation — I sat down and watched some episodes of the series when Tom Baker was doing it. I was not alone, I had two bottles of red wine as company. Tom did it his way, brilliantly. Each of the Doctor's reincarnations was good in their own particular way and each has his own set of fans. In general, you like the Doctor who was around when you were in your early teens."

Doctor Who will be shown on BBC1 on Saturday, March 26

Caption: Knock knock, Who's here - Billie Piper and Christopher Eccleston in Doctor Who on BBC1