Tiny Joe Steps Up to Challenge Dr. Who 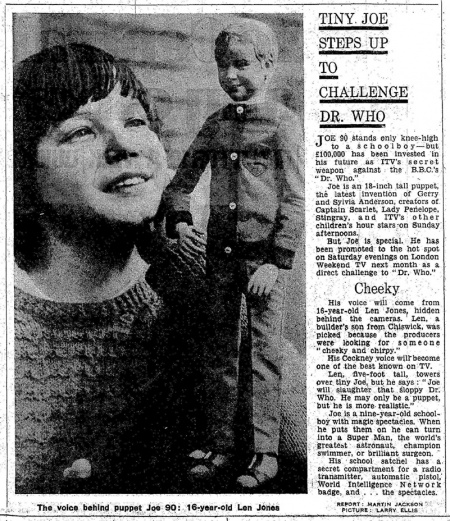 But Joe is special. He has been promoted to the hot spot on Saturday evenings on London Weekend TV next month as a direct challenge to "Dr. Who."

His voice will come from 16-year-old Len Jones hidden behind the cameras. Len, a blinder's son from Chiswick, was 'picked because the producers were looking for someone cheeky and chirpy.'

His Cockney voice will become one of the best known on TV.

Len, five-foot tall, towers over, tiny Joey, but he says : "Joe will slaughter that sloppy Dr. Who. He may only be a puppet, but he is more realistic."

Joe is a nine-year-old schoolboy with magic spectacles. When he puts them on he can turn into a Super Man, the world's greatest astronaut, champion swimmer, or brilliant surgeon. His school satchel has a secret compartment for a radio transmitter, automatic pistol, World Intelligence Network badge, and ... the spectacles.