Tom moves up: Doc to surgeon 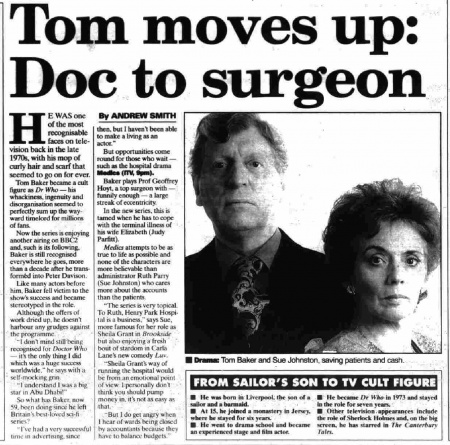 HE WAS one of the most recognisable faces on television back in the late 1970s, with his mop of curly hair and scarf that seemed to go on for ever.

Tom Baker became a cult figure as Dr Who his whackiness, ingenuity and disorganisation seemed to perfectly sum up the wayward timelord for millions of fans.

Now the series is enjoying another airing on BBC 2 and, such is its following, Baker is still recognised everywhere he goes, more than a decade after he transformed into Peter Davison.

Like many actors before him, Baker fell victim to the show's success and became stereotyped in the role.

Although the offers of work dried up, he doesn't harbour any grudges against the programme.

"I don't mind still being recognised for Doctor Who it's the only thing I did which was a huge success worldwide," he says with a self-mocking grin.

"I understand I was a star in Abu Dhabi!"

So what has Baker, now 59, been doing since he left Britain's best-loved sci-fi series?

"I've had a very successful time in advertising, since then, but I haven't been able to make a living as an actor."

But opportunities come round for those who wait such as the hospital drama Medics (ITV 9pm).

In the new series, this is tamed when he has to cope with the terminal illness of his wife Elizabeth (Judy Parfitt).

Medics attempts to be as true to life as possible and none of the characters are more believable than administrator Ruth Parry (Sue Johnston) who cares more about the accounts than the patients.

"The series is very topical. To Ruth, Henry Park Hospital is a business," says Sue, more famous for her role as Sheila Grant in Brookside but also enjoying a fresh bout of stardom in Carla Lane's new comedy Luv.

"Sheila Grant's way of running the hospital would be from an emotional point of view. I personally don't think you should pump money in, it's not as easy as that.

"But I do get angry. when I hear of wards being closed by accountants because they have to balance budgets."