Torchwood is a much more difficult proposition 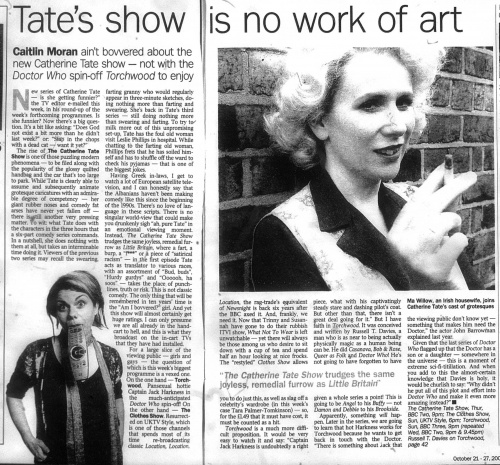 For a large slice of the viewing public — girls and gays — the question of which is this week's biggest programme is a vexed one. On the one hand — Torchwood. Pansexual hottie Captain Jack Harkness in the much-anticipated Doctor Who spin-off. On the other hand — The Clothes Show. Resurrected on UKTV Style, which is one of those channel that spends most of its time re-broadcasting classic Location, Location, Location, the rag-trade's equivalent of Newsnight is back six years after the BBC axed it And, frankly, we need it Now that Trinny and Susannah have gone to do their rubbish ITV' show, What Not To Wear is left unwatchable — yet there will always be those among us who desire to sit down with a cup of tea and spend half an hour looking at nice frocks. The "restyled" Clothes Show allows you to do just this, as well as slag off a celebrity's wardrobe (in this week's case Tara Palmer-Tomkinson) — so, for the £1.49 that it must have cost, it must be counted as a hit.

Torchwood is a much more difficult proposition. It would be very easy to watch it and say: "Captain Jack Harkness is undoubtedly a right piece, what with his captivatingly steady stare and dashing pilot's coat. But other than that, there isn't a great deal going for it" But I have faith in Torchwood. It was conceived and written by Russell T. Davies, a man who is as near to being actually physically magic as a human being can be. He did Casanova, Bob & Rose, Queer as Folk and Doctor Who! He's not going to have forgotten to have given a whole series a point! This is going to be Angel to his Buffy — not Damon and Debbie to his Brookside.

Apparently, something will happen. Later in the series, we are going to learn that hot Harkness works for Torchwood because he wants to get back in touch with the Doctor. "There is something about jack that Ma Willow, an Irish housewife, joins Catherine Tate's cast of grotesques the viewing public don't know yet —something that makes him need the Doctor," the actor John Barrowman explained last year.

Given that the last series of Doctor Who flagged up that the Doctor has a son or a daughter — somewhere in the universe — this is a moment of extreme sci-fi-titillation. And when you add to this the almost-certain knowledge that Davies is holy, it would be churlish to say: "Why didn't he put all of this plot and effort into Doctor Who and make it even more amazing instead?"