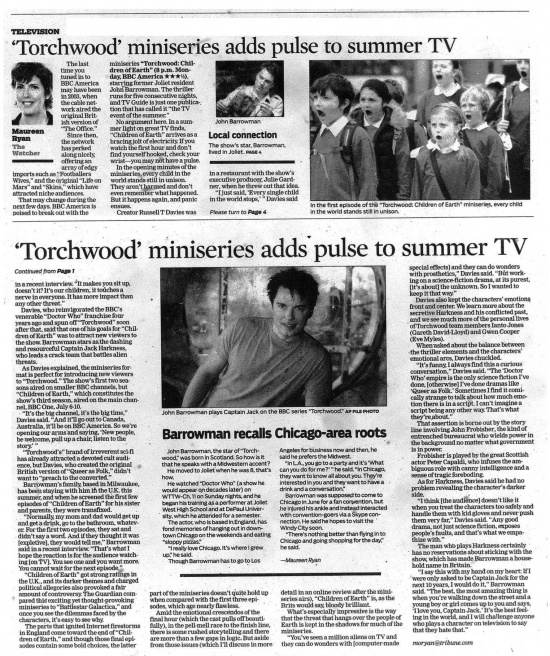 The last time you tuned in to BBC America may have been in 2003, when the cable network aired the original British version of "The Office."

Since then, the network has perked along nicely, offering an array of edgy imports such as "Footballers Wives," and the original "Life on Mars" and "Skins," which have attracted niche audiences.

That may change during the next few days. BBC America is poised to break out with the miniseries "Torchwood: Children of Earth" (8 p.m. Monday, BBC America ★★★1/2), starring former Joliet resident John Barrowman. The thriller runs for five consecutive nights, and TV Guide is just one publication that has called it "the TV event of the summer."

No argument here. In a summer light on great TV finds, "Children of Earth" arrives as a bracing jolt of electricity. If you watch the first hour and don't find yourself hooked, check your wrist -- you may not have a pulse.

In the opening minutes of the miniseries, every child in the world stands still in unison. They aren't harmed and don't even remember what happened. But it happens again, and panic ensues.

Creator Russell T Davies was in a restaurant with the show's executive producer, Julie Gardner, when he threw out that idea.

"I just said, 'Every single child in the world stops,'" Davies said in a recent interview. "It makes you sit up, doesn't it? It's our children, it touches a nerve in everyone. It has more impact than any other threat."

Davies, who reinvigorated the BBC's venerable "Doctor Who" franchise four years ago and spun off "Torchwood" soon after that, said that one of his goals for "Children of Earth" was to attract new viewers to the show. Barrowman stars as the dashing and resourceful Captain Jack Harkness, who leads a crack team that battles alien threats.

As Davies explained, the miniseries format is perfect for introducing new viewers to "Torchwood." The show's first two seasons aired on smaller BBC channels, but "Children of Earth," which constitutes the show's third season, aired on the main channel, BBC One, July 6-10.

"It's the big channel, it's the big time," Davies said. "And it'll go out to Canada, Australia, it'll be on BBC America. So we're opening our arms and saying, 'New people, be welcome, pull up a chair, listen to the story.'"

"Torchwood's" brand of irreverent sci-fi has already attracted a devoted cult audience, but Davies, who created the original British version of "Queer as Folk," didn't want to "preach to the converted."

Barrowman's family, based in Milwaukee, has been staying with him in the U.K. this summer, and when he screened the first few episodes of "Children of Earth" for his sister and parents, they were transfixed.

"Normally, my mom and dad would get up and get a drink, go to the bathroom, whatever. For the first two episodes, they sat and didn't say a word. And if they thought it was [expletive], they would tell me," Barrowman said in a recent interview. "That's what I hope the reaction is for the audience watching [on TV]. You see one and you want more. You cannot wait for the next episode."

"Children of Earth" got strong ratings in the U.K., and its darker themes and charged political allegories also provoked a fair amount of controversy. The Guardian compared this exciting yet thought-provoking miniseries to "Battlestar Galactica," and once you see the dilemmas faced by the characters, it's easy to see why.

The parts that ignited Internet firestorms in England come toward the end of "Children of Earth," and though those final episodes contain some bold choices, the latter part of the miniseries doesn't quite hold up when compared with the first three episodes, which are nearly flawless.

Amid the emotional crescendos of the final hour (which the cast pulls off beautifully), in the pell-mell race to the finish line, there is some rushed storytelling and there are more than a few gaps in logic. But aside from those issues (which I'll discuss in more detail in an online review after the miniseries airs), "Children of Earth" is, as the Brits would say, bloody brilliant.

What's especially impressive is the way that the threat that hangs over the people of Earth is kept in the shadows for much of the miniseries.

Davies also kept the characters' emotions front and center. We learn more about the secretive Harkness and his conflicted past, and we see much more of the personal lives of Torchwood team members Ianto Jones (Gareth David-Lloyd) and Gwen Cooper (Eve Myles).

When asked about the balance between the thriller elements and the characters' emotional arcs, Davies chuckled.

"It's funny, I always find this a curious conversation," Davies said. "The 'Doctor Who' empire is the only science fiction I've done, [otherwise] I've done dramas like 'Queer as Folk.' Sometimes I find it comically strange to talk about how much emotion there is in a script. I can't imagine a script being any other way. That's what they're about."

That assertion is borne out by the story line involving John Frobisher, the kind of entrenched bureaucrat who wields power in the background no matter what government is in power.

Frobisher is played by the great Scottish actor Peter Capaldi, who infuses the ambiguous role with canny intelligence and a sense of tragic foreboding.

As for Harkness, Davies said he had no problem revealing the character's darker side.

"I think [the audience] doesn't like it when you treat the characters too safely and handle them with kid gloves and never push them very far," Davies said. "Any good drama, not just science fiction, exposes people's faults, and that's what we empathize with."

The man who plays Harkness certainly has no reservations about sticking with the show, which has made Barrowman a household name in Britain.

"I say this with my hand on my heart: If I were only asked to be Captain Jack for the next 10 years, I would do it," Barrowman said. "The best, the most amazing thing is when you're walking down the street and a young boy or girl comes up to you and says, 'I love you, Captain Jack.' It's the best feeling in the world, and I will challenge anyone who plays a character on television to say that they hate that."

John Barrowman, the star of "Torchwood," was born in Scotland. So how is it that he speaks with a Midwestern accent?

He moved to Joliet when he was 8, that's how.

He watched "Doctor Who" (a show he would appear on decades later) on WTTW-Ch. 11 on Sunday nights, and he began his training as a performer at Joliet West High School and at DePaul University, which he attended for a semester.

The actor, who is based in England, has fond memories of hanging out in downtown Chicago on the weekends and eating "sloppy pizzas."

"I really love Chicago. It's where I grew up," he said.

Though Barrowman has to go to Los Angeles for business now and then, he said he prefers the Midwest.

"In L.A., you go to a party and it's 'What can you do for me?'" he said. "In Chicago, they want to know all about you. They're interested in you and they want to have a drink and a conversation."

Barrowman was supposed to come to Chicago in June for a fan convention, but he injured his ankle and instead interacted with convention-goers via a Skype connection. He said he hopes to visit the Windy City soon.

"There's nothing better than flying in to Chicago and going shopping for the day," he said.