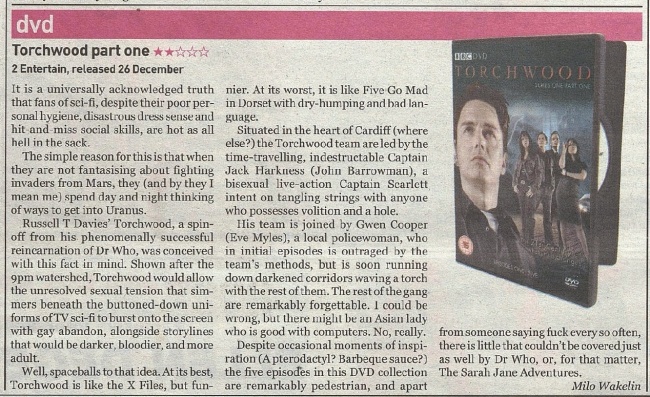 It is a universally acknowledged truth that fans of sci-fi, despite their poor personal hygiene, disastrous dress sense and hit-and-miss social skills, are hot as all hell in the sack.

The simple reason for this is that when they are not fantasising about fighting invaders from Mars, they (and by they I mean me) spend day and night thinking of ways to get into Uranus.

Russell T Davies' Torchwood, a spinoff from his phenomenally successful reincarnation of Dr Who, was conceived with this fact in mind. Shown after the 9pm watershed, Torchwood would allow the unresolved sexual tension that simmers beneath the buttoned-down uniforms of TV sci-fi to burst onto the screen with gay abandon, alongside storylines that would be darker, bloodier, and more adult.

Well, spaceballs to that idea. At its best, Torchwood is like the X Files, but fun nier. At its worst, it is like Five Go Mad in Dorset with dry-humping and bad language.

Situated in the heart of Cardiff (where else?) the Torchwood team are led bythe time-travelling, indestructable Captain Jack Harkness (John Barrowman), a bisexual live-action Captain Scarlett intent on tangling strings with anyone who possesses volition and a hole.

His team is joined by Gwen Cooper (Eve Myles), a local policewoman, who in initial episodes is outraged by the teams methods, but is soon running down darkened corridors waving a torch with the rest of them. The rest of the gang are remarkably forgettable. I could be wrong, but there might be an Asian lady who is good with computers. No, really. Despite occasional moments of inspiration (A pterodactyl? Barbeque sauce?) the five episodes in this DVD collection are remarkably pedestrian, and apart from someone saying fuck every so often, there is little that couldn't be covered just as well by Dr Who, or, for that matter, The Sarah Jane Adventures.