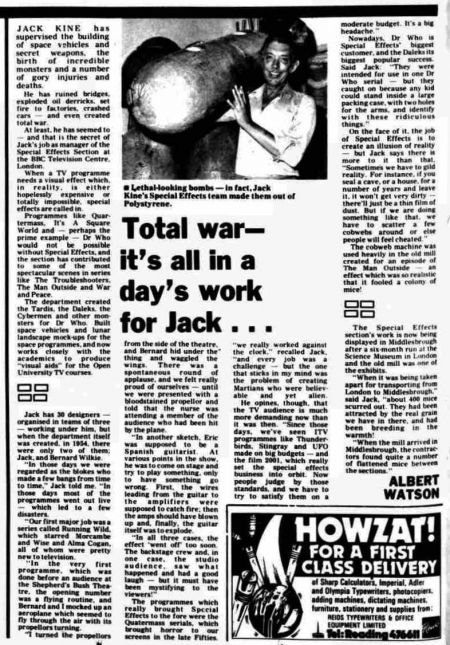 JACK KINE has supervised the building of space vehicles and secret weapons, the birth of incredible monsters and a number of Rory injuries and deaths.

At least, he has seemed to - and that is the secret of Jack's job as manager of the Special Effects Section at the BBC Television Centre, London.

When TV programme needs a visual effect which in reality. is either hopelessly expensive totally impossible. special effects are called in.

Programmes like Quartermass, It's A Square World and perhaps the prime example - Dr Who would not be possible without Special Effects and the section has contributed to some of the most spectacular wees in series like The Troubleshooter The Man Outside and War and Peace.

The department created the Tardis, the Daleks, the Cybermen and other monsters for Dr Who. Built space vehicles and lunar landscape mockups for the space programmes, and now works closely with the academics to produce "visual aids" for the Open University TV courses.

Jack has 30 designers - organised in teams of three - working under him, but when the department itself was created in 1954, there were only two of them, Jack, and Bernard Wilkie.

"In those days we were regarded as the blokes who made a few bangs from time to time," Jack told me. "In those days most of the programmes went out live - which led to few disasters.

"Our first major job was series called Running Wild which starred Morecambe and Wise and Alma Cogan, all of whom were pretty new to television

"In the very first programme, which was done before an audience at the Shepherds Bush Theatre, the opening number was a fling routine, and Bernard and I mocked up an aeroplane which seemed to fly through the air with its propellers turning.

"I turned the propellers from the side of the theatre, and Bernard hid under the thing and waggled the wings. There was a spontaneous round of applause, and we felt really proud of ourselves until we were presented with a bloodstained propeller and told that the nurse was attending a member of the audience who had been hit by the plane.

"In another sketch, Eric was supposed to be a Spanish guitarist. At various points in the show he was to come on stage and try to play something only to have something wrong. First, the wires leading from the guitar to the amplifiers were supposed to catch fire: then the amps should have blown up and finally, the guitar itself was to explode.

"In all three cases, the effect went or too soon The backstage crew and in one case, the studio audience, saw what happened and had a good laugh but must have been mystifying to the viewers!"

The programmes which really brought Special Effects to the fore were the Quatermass serials, which brought horror tour screen in the late Fifties.

"we really worked the clock," recalled Jack, "and every job was a challenge - but the one that sticks in my mind was the problem of creating Martians who were blev able and yet alien.

He opines, though, that the TV audience is much more demanding now than it was then. Since these days, we've seen ITV programmes like Thunderbirds, Stingray and UFO made on big budgets and the film 2001, which really set the special effects business into orbit. Now people judge by those standards and we have to try to satisfy them on moderate budget. It's a big headache."

Nowadays, Dr Who is Special Effects biggest customer and the Daleks its biggest popular success. Said Jake: "They were intended for use in one Dr Who serial - but they caught on because any kid could stand inside a large packing case, with two holes for the arms and identify with these ridiculous things."

The cobweb machine was used heavily in the old mill created for an episode of The Man Outside - an effect which was a realistic that it fooled a colony of mice.

The Special Effects section's work is now being displayed in Middlesborough after six month run at the Science Museum in London and the old mill was one of the exhibits.

"When it was being taken apart for transporting from London to Middlesbrough," said Jack, "about 400 mice scurred out. They had been attracted by the real grain we have in there, and had been breeding in the warmth!

"When the mill arrived in Middlesbrough, the contractors found quite a number of flattened mice between the sections.