Toying with the market 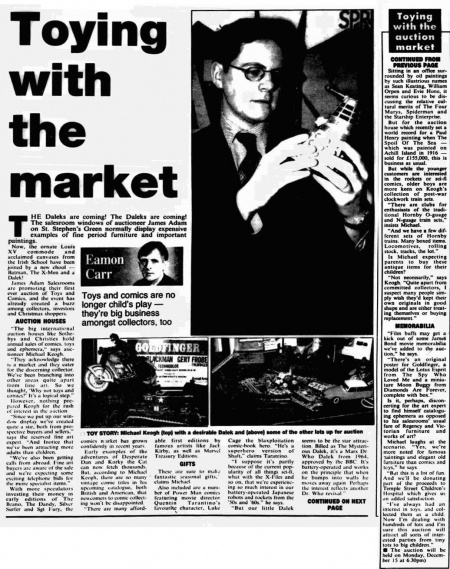 Toys and comics are no longer child's play —they're big business amongst collectors, too

Now, the ornate Louis XV commode and acclaimed canvases from the Irish School have been joined by a new school —Batman. The X-Men and a Dalek!

James Adam Salesrooms are promoting their first ever auction of Toys and Comics, and the event has already created a bun among collectors, investors and Christmas shoppers.

"They acknowledge there is a market and they cater for the discerning collector. We've been branching into other areas quite apart from line art. So we thought. 'Why not toys and comics?' It's a logical step."

However, nothing prepared Keogh for the rush or interest in the auction.

"Since we put up our window display we've created quite a stir, both from prospective buyers and sellers." says the reserved tine art expert. "And I notice that we've been attracting more adults than children.

"We've also been getting calls from abroad. Fine art buyers are aware of the sale and we're expecting some exciting telephone bids for the more specialist items."

With more speculators inventing their money in early editions of The Beano, The Dandy, Silver Surfer and Sgt Fury, the comics market has grown confidently in recent years.

Early examples of the adventures of Desperate Dan and Korky the Cat can now fetch thousands. But, according to Michael Keogh. there are so many vintage comic titles in his upcoming catalogue, both British and American, that newcomers to comic collecting won't be disappointed.

"There are many afford able first editions by famous artists like Jack Kirby, as well as Marvel Treasury Editions.

These are sure to make fantastic seasonal gifts, claims Michael.

"I suppose it's partly because of the current popularity of all things sci-fi, what with the X-Files and so on, that we're experiencing so much interest in our battery-operated Japanese robots and rockets from the '50s and '60s," he says.

"But our little Dalek seems to be the star attraction Billed as The Mysterious Dalek. it's a Marx Dr. Who Dalek from 1964, approved by the BBC. It's battery-operated and works on the principle that when he bumps into walls he moves away again Perhaps the interest reflects another Dr. Who revisal."

Sitting in an office surrounded by oil paintings by such illustrious names as Sean Keating, William Orpen and Evie Hone, it seems curious to be discussing the relative cultural merits of The Four Marys, Spiderman and the Starship Enterprise.

But for the auction house which recently set a world record for a Paul Henry painting when The Spoil Of The Sea which was painted on Achill Island in 1916 — sold for £155,030, this is business as usual.

But while the younger customers are interested in the rockets or sci-fi comics, older boys are more keen on Keogh's collection of post-war clockwork train sets.

"There are clubs for enthusiasts of the traditional Hornby O-guage and N-guage train sets," insists Michael.

"And we have a few different sets of Hornby trains. Many boxed items. Locomotives, rolling stock, tracks, the lot."

Is Michael expecting parents to buy these antique items for their children?

"Not necessarily," say Keogh. "Quite apart from committed collectors, I suspect many people simply wish they'd kept their own originals in good shape and are either treating themselves or buying replacement."

"Film buffs may get a kick out of some James Bond movie memorabilia we've added to the auction," he says.

"There's an original poster for Goldfinger, a model of the Lotus Esprit from The Spy Who Loved Me and a miniature Moon Buggy Irons Diamonds Are Forever, complete with box."

Is it, perhaps, disconcerting for the art expert to find himself cataloguing ephemera as opposed to his salesrooms' usual fare of Regency and Victorian furniture and works of art?

"But this is a lot of fun. And we'll be donating part of the proceeds to Temple Street Children's Hospital which gives us an added satisfaction.

"I've always had an interest in toys, and collected them as a child. Now I'm dealing with hundreds of lots and I'm sure this auction will attract all sorts of interested parties from tiny tots to big children."

Caption: TOY STORY Michael Keogh (top) with a desirable Dalek and (above) some of the other lots up for auction