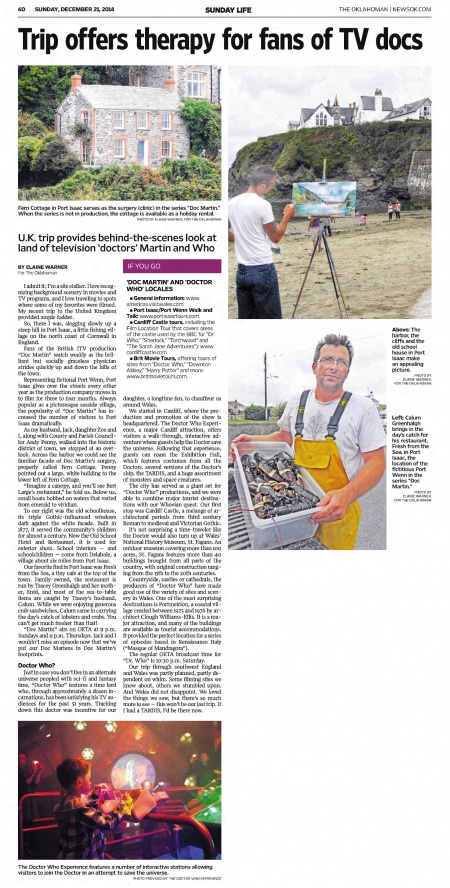 U.K. trip provides behind-the-scenes look at land of television 'doctors' Martin and Who

I admit it; I'm a site stalker. I love recognizing background scenery in movies and TV programs, and I love traveling to spots where some of my favorites were filmed. My recent trip to the United Kingdom provided ample fodder.

So, there I was, slogging slowly up a steep hill in Port Isaac, a little fishing village on the north coast of Cornwall in England.

Fans of the British ITV production "Doc Martin" watch weekly as the brilliant but socially graceless physician strides quickly up and down the hills of the town.

Representing fictional Port Wenn, Port Isaac gives over the streets every other year as the production company moves in to film for three to four months. Always popular as a picturesque seaside village, the popularity of "Doc Martin" has increased the number of visitors to Port Isaac dramatically.

As my husband, Jack, daughter Zoe and I, along with County and Parish Councillor Andy Penny, walked into the historic district of town, we stopped at an over - look. Across the harbor we could see the familiar facade of Doc Martin's surgery, properly called Fern Cottage. Penny pointed out a large, white building to the lower left of Fern Cottage.

"Imagine a canopy, and you'll see Bert Large's restaurant" he told us. Below us, small boats bobbed on waters that varied from emerald to viridian.

To our right was the old schoolhouse, its triple Gothic-influenced windows dark against the white facade. Built in 1877, it served the community's children for almost a century. Now the Old School Hotel and Restaurant, it is used for exterior shots. School interiors — and schoolchildren — come from Delabole, a village about six miles from Port Isaac.

Our favorite find in Port Isaac was Fresh from the Sea, a tiny cafe at the top of the town. Family-owned, the restaurant is run by Tracey Greenhalgh and her mother, Enid, and most of the sea-to-table items are caught by Tracey's husband, Calum. While we were enjoying generous crab sandwiches, Calum came in carrying the day's catch of lobsters and crabs. You can't get much fresher than that!

"Doc Martin" airs on OETA at u p.m. Sundays and 9 p.m. Thursdays. Jack and I wouldn't miss an episode now that we've put our Doc Martens in Doc Martin's footprints.

Just in case you don't live in an alternate universe peopled with sci-fi and fantasy fans, "Doctor Who" features a time lord who, through approximately a dozen incarnations, has been satisfying his TV audiences for the past 51 years. Tracking down this doctor was incentive for our daughter, a longtime fan, to chauffeur us around Wales.

We started in Cardiff, where the production and promotion of the show is headquartered. The Doctor Who Experience, a major Cardiff attraction, offers visitors a walk-through, interactive adventure where guests help the Doctor save the universe. Following that experience, guests can roam the Exhibition Hall, which features costumes from all the Doctors, several versions of the Doctor's ship, the TARDIS, and a huge assortment of monsters and space creatures.

The city has served as a giant set for "Doctor Who" productions, and we were able to combine major tourist destinations with our Whovian quest. Our first stop was Cardiff Castle, a melange of architectural periods from third century Roman to medieval and Victorian Gothic.

It's not surprising a time-traveler like the Doctor would also turn up at Wales' National History Museum, St. Fagans. An outdoor museum covering more than 100 acres, St. Fagans features more than 4o buildings brought from all parts of the country, with original construction ranging from the 13th to the 2oth centuries.

Countryside, castles or cathedrals, the producers of "Doctor Who" have made good use of the variety of sites and scenery in Wales. One of the most surprising destinations is Portmeirion, a coastal village created between 1925 and 1976 by architect Clough Williams-Ellis. It is a major attraction, and many of the buildings are available as tourist accommodations. It provided the perfect location for a series of episodes based in Renaissance Italy ("Masque of Mandragora").

Our trip through southwest England and Wales was partly planned, partly dependent on whim. Some filming sites we knew about, others we stumbled upon. And Wales did not disappoint. We loved the things we saw, but there's so much more to see — this won't be our last trip. If I had a TARDIS, I'd be there now.

'DOC MARTIN' AND 'DOCTOR WHO' LOCALES

• Cardiff Castle tours, including the Film Location Tour that covers areas of the castle used by the BBC for "Dr. Who," "Sherlock," "Torchwood" and "The Sarah Jane Adventures"): www.cardiffcastle.com.

The Doctor Who Experience features a number of interactive stations allowing visitors to join the Doctor in an attempt to save the universe.

Fern Cottage in Port Isaac serves as the surgery (clinic) in the series "Doc Martin." When the series is not in production, the cottage is available as a holiday rental.

Above: The harbor, the cliffs and the old school house in Port Isaac make an appealing picture.

Left: Calum Greenhalgh brings in the day's catch for his restaurant, Fresh from the Sea, in Port Isaac, the location of the fictitious Port Wenn in the series "Doc Martin."