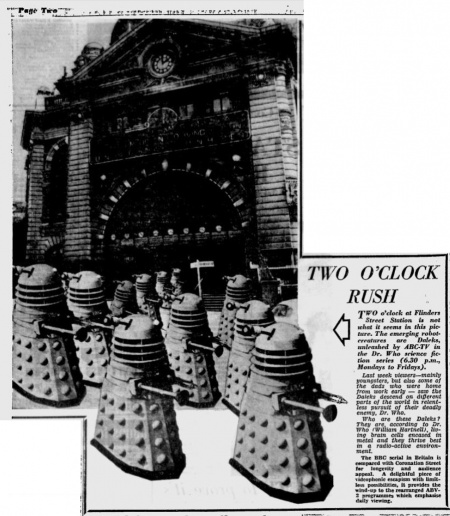 TWO o'clock at Flinders Street Station a not what it seems in this picture. The emerging robot-creatures are Daleks, unleashed by ABC-TV in the Dr. Who science fiction series (6.30 p.m., Mondays to Fridays).

Last week viewers—mainly youngsters, but also some of the dads who were home from work early — saw the Daleks descend on different parts of the world in relentless pursuit of their deadly enemy, Dr. Who.

Who are these Daleks? They are, according to Dr. Who (William Hartnell), living brain cells encased in metal and they thrive best in a radio-active environment.

The BBC serial in Britain is compared with Coronation Street far longevity and audience appeal. A delightful piece of videophonic escapism with limitless possibilities, it provides the wind-up to the rearranged ABV-2 which emphasise daily viewing.