Two more chances to hide behind the sofa 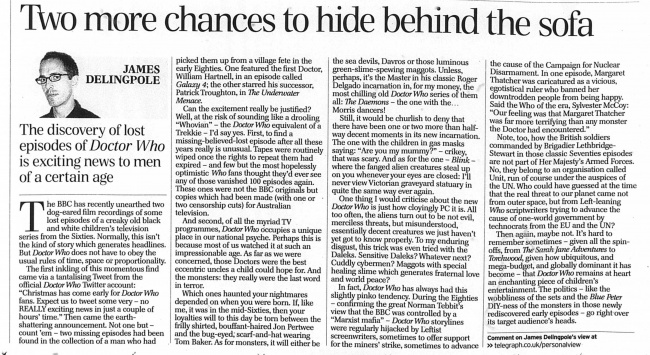 The BBC has recently unearthed two dog-eared film recordings of some lost episodes of a creaky old black and white children's television series from the Sixties. Normally, this isn't the kind of story which generates headlines. But Doctor Who does not have to obey the usual rules of time, space or proportionality.

The first inkling of this momentous find came via a tantalising Tweet from the official Doctor Who Twitter account: "Christmas has come early for Doctor Who fans. Expect us to tweet some very - no REALLY exciting news in just a couple of hours' time." Then came the earth-shattering announcement. Not one but - count 'em - two missing episodes had been found in the collection of a man who had picked them up from a village fete in the early Eighties. One featured the first Doctor, William Hartnell, in an episode called Galaxy 4; the other starred his successor, Patrick Troughton, in The Underwater Menace.

Can the excitement really be justified? Well, at the risk of sounding like a drooling "Whovian" - the Doctor Who equivalent of a Trekkie - I'd say yes. First, to find a missing-believed-lost episode after all these years really is unusual. Tapes were routinely wiped once the rights to repeat them had expired - and few but the most hopelessly optimistic Who fans thought they'd ever see any of those vanished 100 episodes again. These ones were not the BBC originals but copies which had been made (with one or two censorship cuts) for Australian television.

And second, of all the myriad TV programmes, Doctor Who occupies a unique place in our national psyche. Perhaps this is because most of us watched it at such an impressionable age. As far as we were concerned, those Doctors were the best eccentric uncles a child could hope for. And the monsters: they really were the last word in terror.

Which ones haunted your nightmares depended on when you were born. If, like me, it was in the mid-Sixties, then your loyalties will to this day be torn between the frilly shirted, bouffant-haired Jon Pertwee and the bug-eyed, scarf-and-hat wearing Tom Baker. As for monsters, it will either be the sea devils, Davros or those luminous green-slime-spewing maggots. Unless, perhaps, it's the Master in his classic Roger Delgado incarnation in, for my money, the most chilling old Doctor Who series of them all: The Daemons - the one with the... Morris dancers!

Still, it would be churlish to deny that there have been one or two more than halfway decent moments in its new incarnation. The one with the children in gas masks saying: "Are you my mummy?" - crikey, that was scary. And as for the one - Blink - where the fanged alien creatures steal up on you whenever your eyes are closed: I'll never view Victorian graveyard statuary in quite the same way ever again.

One thing I would criticise about the new Doctor Who is just how cloyingly PC it is. All too often, the aliens turn out to be not evil, merciless threats, but misunderstood, essentially decent creatures we just haven't yet got to know properly. To my enduring disgust, this trick was even tried with the Daleks. Sensitive Daleks? Whatever next? Cuddly cybermen? Maggots with special healing slime which generates fraternal love and world peace?

In fact, Doctor Who has always had this slightly pinko tendency. During the Eighties - confirming the great Norman Tebbit's view that the BBC was controlled by a "Marxist mafia" - Doctor Who storylines were regularly hijacked by Leftist screenwriters, sometimes to offer support for the miners' strike, sometimes to advance the cause of the Campaign for Nuclear Disarmament. In one episode, Margaret Thatcher was caricatured as a vicious, egotistical ruler who banned her downtrodden people from being happy. Said the Who of the era, Sylvester McCoy: "Our feeling was that Margaret Thatcher was far more terrifying than any monster the Doctor had encountered."

Note, too, how the British soldiers commanded by Brigadier Lethbridge-Stewart in those classic Seventies episodes are not part of Her Majesty's Armed Forces. No, they belong to an organisation called Unit, run of course under the auspices of the UN. Who could have guessed at the time that the real threat to our planet came not from outer space, but from Left-leaning Who scriptwriters trying to advance the cause of one-world government by technocrats from the EU and the UN?

Then again, maybe not. It's hard to remember sometimes - given all the spinoffs, from The Sarah Jane Adventures to Torchwood, given how ubiquitous, and mega-budget, and globally dominant it has become - that Doctor Who remains at heart an enchanting piece of children's entertainment. The politics - like the wobbliness of the sets and the Blue Peter DIY-ness of the monsters in those newly rediscovered early episodes - go right over its target audience's heads.