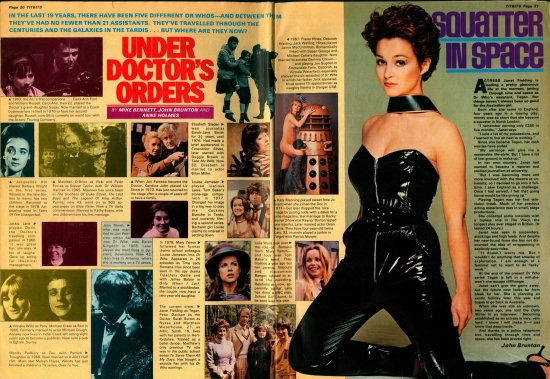 IN THE LAST 19 YEARS, THERE HAVE BEEN FIVE DIFFERENT DR WHOS—AND BETWEEN THEY'VE HAD NO FEWER THAN 21 ASSISTANTS. THEY'VE TRAVELLED THROUGH THE CENTURIES AND THE GALAXIES IN THE TARDIS ... BUT WHERE ARE THEY NOW?

1963: the doc's first companions ... Carol Ann Ford and William Russell. Carol Ann, then 22, played the Doctor's grand-daughter Susan. Now married to a Czech businessman, retired in 1976 to have her second daughter. Russell, now 56 is currently on world tour with the Actors' Touring Company.

Jacqueline Hill played Barbara Wright in the first series. Retired in the late-Sixties to marry; has two children. Returned to the stage in 1978. Appearing soon in Tales Of The Unexpected.

Jackie Lane - played Dodo, the Doctor's travelling companion in 1966. 'It was great fun,' she says. 'A lot of laughs.' Gave up acting for theatrical management.

Wendy Padbury as Zoe, with Patrick Troughton in 1968. Now married to It Ain't Half Hot, Mum star Melvyn Hayes, Wendy has just finished a children's TV series, Over To You.

Maureen O'Brien as Vicki and Peter Purves as Steven Taylor, with 'Dr' William Hartnell in 1965. Maureen has since been in The Duchess Of Duke Street, The Lost Boys and The Legend Of King Arthur. Purves, now 43, went on to 900 appearances on Blue Peter. Now a TV darts commentator. Married to Kathy Evans, with two children from his first marriage.

Jean Marsh, - who was married to Jon Pertwee when he was Dr Who, was Sarah Kingdom in 1965. Later played the maid Rose in Upstairs, Downstairs. Now 43, Jean lives in America, where she is working on a TV series.

When Jon Pertwee became the Doctor, Caroline John played Liz Shaw in 1970. Has just returned to the stage after a couple of years off to have a family.

In 1978, Mary Tamm - followed her former drama school colleague Louise Jameson into Dr Who. Appeared in 26 episodes as Time Lady Romana. Has since been seen in the spy drama Treachery Game and with James Bolam in Only When I Larf. Married to a stockbroker, the couple now have a two-year-old daughter.

Elisabeth Sladen was journalist Sarah-Jane Smith for 22 years, until 1976. Had made a brief appearance in Coronation Street, later starred with Duggie Brown in Take My Wife. Now 32, Elisabeth is married to actor Brian Miller.

Louise Jameson - played luscious Leela, Tom Baker's stone-age companion in 1977. Changed her image in a big way to play the Cockney Blanche in Tenko, and currently filming a second series. Bachelor girl Louise claims no interest in settling down.

Katy Manning played sweet little Jo Grant when she joined the Doc in 1971—but later dropped the 'nice' image by posing nude with a dalek for a 1irlie magazine. Her marriage to Rocky Horror Show star Raynor Burton lasted two months. Later married actor Dean Harris. They have four-year-old twins. Katy, 32, recently played a junkie in Target with Patrick Mower.

Lalla Ward took over the role of Romana from Mary Tamm and took over Tom Baker's heart. They married a year ago but her parents, Viscount and Viscountess Bangor, refused to attend the wedding. Relations are now, apparently, "cordial". Lalla has done a BBC play, School Girl Chums, to be seen later this year.

The current crew: - Janet Fielding as Tegan, Peter Davison as the Doctor, Sarah Sutton as Nyssa and Matthew Waterhouse, 21, as Adric. Sarah, 19, lives with her parents in Hertfordshire. Trained as a ballet dancer. Matthew's only previous TV role was in the public school series To Serve Them All My Days. Has bought a seaside flat with his Dr Who earnings.

ACTRESS Janet Fielding is leading a pretty glamorous life at the moment, jetting through time and space as Dr Who's assistant, Tegan. But things haven't always been so good for the Australian girl.

Soon after she came to England, four years ago in a touring play, money was so short that she became a squatter in North London.

"I remember earning only £250 in five months," Janet says.

"I sold a lot of my possessions, and I learned to live on next to nothing."

Since she became Tegan, her cash worries have ended.

"My earnings will give me a reasonable life-style. But I have a lot of lost ground to make up."

In her own country, Janet had wanted to become a reporter and studied journalism at university.

"But I was becoming more and more involved with the theatre at university, so I decided to go into it full-time. I saw England as a challenge. Once I had arrived, I felt that going home would be like giving up."

Playing Tegan was her first television break. Much of her previous acting experience was in small, stage productions.

She collected some notoriety with a topless role in The Warp, the longest play ever staged in Britain. (It lasted 24 hours.)

Janet was seen in suspenders, stockings and high heels. And despite her new-found fame she has not discounted the idea of re-appearing in explicitly sexy roles.

"It doesn't worry me. But I wouldn't do anything that smacks of exploitation. I am enough of a feminist not to want to do 'tacky' work."

At the end of the present Dr Who series Tegan is left in a will-she-won't-she-escape cliffhanger.

Janet can't give the game away, but the future now looks far from bleak for her. She is planning an exotic holiday later this year and hopes to go back to Australia.

When she was still an unknown, two years ago, she told the Daily Mirror in an interview: "Becoming established as an actress is very, very hard. I know I will make it—I just know that deep inside."

And thanks to a police telephone box travelling through time and space, she has been proved right.