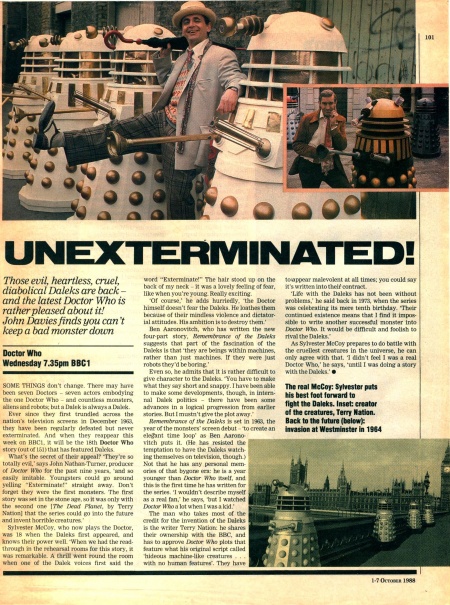 Those evil, heartless, cruel, diabolical Daleks are back and the latest Doctor Who is rather pleased about it! John Davies finds you can't peep a bad monster down

SOME THINGS don't change. There may have been seven Doctors - seven actors embodying the one Doctor Who - and countless monsters, aliens and robots; but a Dalek is always a Dalek. Ever since they first trundled across the nation's television screens in December 1963, they have been regularly defeated but never exterminated. And when they reappear this peek on BBC1, it will be the 18th Doctor Who story (out of 151) that has featured Daleks.

What's the secret of their appeal? 'They're so totally evil,' says John Nathan-Turner, producer of Doctor Who for the past nine years, 'and so easily imitable. Youngsters could go around yelling "Exterminate!" straight away. Don't forget they were the first monsters. The first story was set in the stone age, so it was only with the second one The Dead Planet, by Terry Nation that the series could go into the future and invent horrible creatures.'

Sylvester McCoy, who now plays the Doctor, was 18 when the Daleks first appeared, and knows their power well. 'When we had the read-through in the rehearsal rooms for this story, it was remarkable. A thrill went round the room when one of the Dalek voices first said the word "Exterminate!" The hair stood up on the back of my neck - it was a lovely feeling of fear, like when you're young. Really exciting.

'Of course,' he adds hurriedly, 'the Doctor himself doesn't fear the Daleks. He loathes them because of their mindless violence and dictatorial attitudes. His ambition is to destroy them.'

Ben Aaronovitch, who has written the new four-part story, Remembrance of the Daleks suggests that part of the fascination of the Daleks is that 'they are beings within machines, rather than just machines. If they were just robots they'd be boring.'

Even so, he admits that it is rather difficult to give character to the Daleks. 'You have to make what they say short and snappy. I have been able to make some developments, though, in internal Dalek politics - there have been some advances in a logical progression from earlier stories. But I mustn't give the plot away.'

Remembrance of the Daleks is set in 1963, the year of the monsters' screen debut - 'to create an elegant time loop' as Ben Aaronovitch puts it. (He has resisted the temptation to have the Daleks watching themselves on television, though.) Not that he has any personal memories of that bygone era: he is a year younger than Doctor Who itself, and this is the first time he has written for the series. 'I wouldn't describe myself as a real fan,' he says, 'but I watched Doctor Who a lot when I was a kid.'

The man who takes most of the credit for the invention of the Daleks is the writer Terry Nation: he shares their ownership with the BBC, and has to approve Doctor Who plots that feature what his original script called 'hideous machine-like creatures .. . with no human features'. They have to appear malevolent at all times; you could say it's written into their contract.

'Life with the Daleks has not been without problems,' he said back in 1973, when the series was celebrating its mere tenth birthday. 'Their continued existence means that I find it impossible to write another successful monster into Doctor Who. It would be difficult and foolish to rival the Daleks.'

As Sylvester McCoy prepares to do battle with the cruellest creatures in the universe, he can only agree with that. 'I didn't feel I was a real Doctor Who,' he says, 'until I was doing a story with the Daleks.'

The real McCoy: Sylvester puts his best foot forward to fight the Daleks. Inset: creator of the creatures, Terry Nation. Back to the future (below): invasion at Westminster in 1964