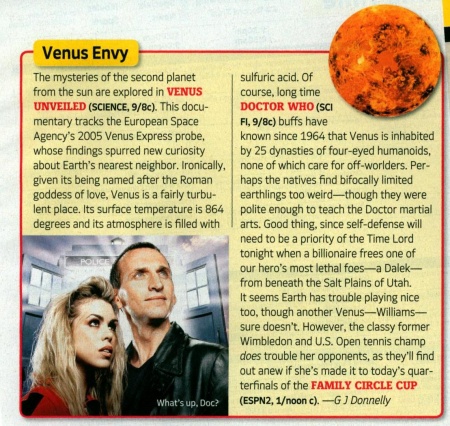 The mysteries of the second planet from the sun are explored in VENUS UNVEILED (SCIENCE, 9/8c). This documentary tracks the European Space Agency's 2005 Venus Express probe, whose findings spurred new curiosity about Earth's nearest neighbor. Ironically, given its being named after the Roman goddess of love, Venus is a fairly turbulent place. Its surface temperature is 864 degrees and its atmosphere is filled with sulfuric acid. Of course, long time DOCTOR WHO (SCI FI, 9/8c) buffs have known since 1964 that Venus is inhabited by 25 dynasties of four-eyed humanoids, none of which care for off-worlders. Perhaps the natives find bifocally limited earthlings too weird—though they were polite enough to teach the Doctor martial arts. Good thing, since self-defense will need to be a priority of the Time Lord tonight when a billionaire frees one of our hero's most lethal foes—a Dalek—from beneath the Salt Plains of Utah. It seems Earth has trouble playing nice too, though another Venus—Williams—sure doesn't. However, the classy former Wimbledon and U.S. Open tennis champ does trouble her opponents, as they'll find out anew if she's made it to today's quarterfinals of the FAMILY CIRCLE CUP (ESPN2, 1/noon c).