Viewers can easily get off on Brit thriller 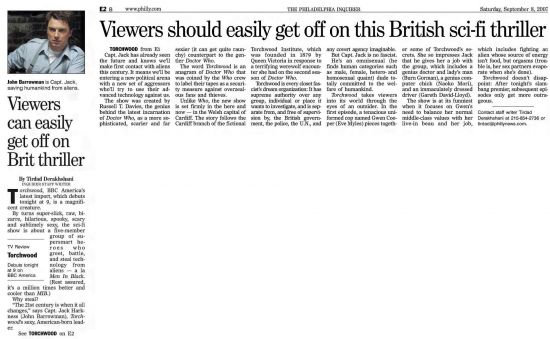 Torchwood, BBC America's latest import, which debuts tonight at 9, is a magnificent creature.

By turns super-slick, raw, bizarre, hilarious, spooky, scary and sublimely sexy, the sci-fi show is about a five-member group of supersmart heroes who greet, battle, and steal technology from aliens — a la Men In Black. (Rest assured, it's a million times better and cooler than MIB.)

Capt. Jack has already seen the future and knows we'll make first contact with aliens this century. It means we'll be entering a new political arena with a new set of aggressors who'll try to use their advanced technology against us.

The show was created by Russell T. Davies, the genius behind the latest incarnation of Doctor Who, as a more sophisticated, scarier and far sexier (it can get quite raunchy) counterpart to the gentler Doctor Who.

The word Torchwood is an anagram of Doctor Who that was coined by the Who crew to label their tapes as a security measure against overzealous fans and thieves.

Unlike Who, the new show is set firmly in the here and now — in the Welsh capital of Cardiff. The story follows the Cardiff branch of the fictional Torchwood Institute, which was founded in 1879 by Queen Victoria in response to a terrifying werewolf encounter she had on the second season of Doctor Who.

Torchwood is every closet fascist's dream organization: It has supreme authority over any group, individual or place it wants to investigate, and is separate from, and free of supervision by, the British government, the police, the U.N., and any covert agency imaginable.

But Capt. Jack is no fascist.

He's an omnisexual (he finds human categories such as male, female, hetero and homosexual quaint) dude totally committed to the welfare of humankind.

Torchwood takes viewers into its world through the eyes of an outsider. In the first episode, a tenacious uniformed cop named Gwen Cooper (Eve Myles) pieces together some of Torchwood's secrets. She so impresses Jack that he gives her a job with the group, which includes a genius doctor and lady's man (Burn Gorman), a genius computer chick (Naoko Mori), and an immaculately dressed driver (Gareth David-Lloyd).

The show is at its funniest when it focuses on Gwen's need to balance her normal middle-class values with her live-in beau and her job, which includes fighting an alien whose source of energy isn't food, but orgasms (trouble is, her sex partners evaporate when she's done).