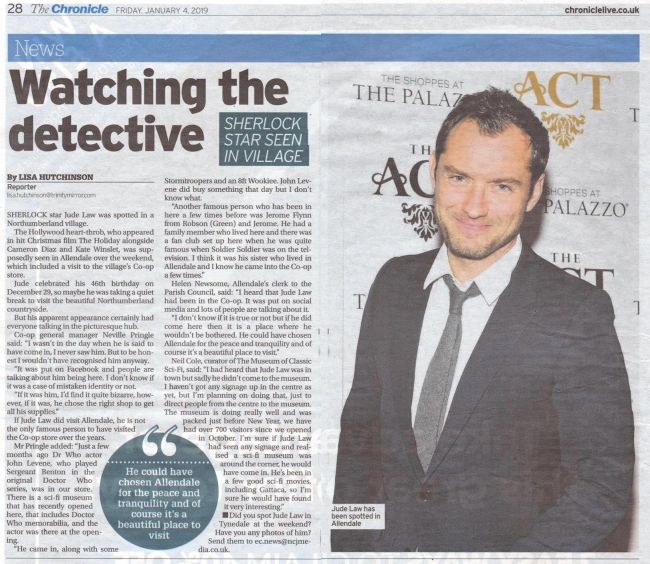 SHERLOCK star Jude Law was spotted in a Northumberland village.

The Hollywood heart-throb, who appeared in hit Christmas film The Holiday alongside Cameron Diaz and Kate Winslet, was supposedly seen in Allendale over the weekend, which included a visit to the village's Co-op store.

Jude celebrated his 46th birthday on December 29, so maybe he was taking a quiet break to visit the beautiful Northumberland countryside.

But his apparent appearance certainly had everyone talking in the picturesque hub.

Co-op general manager Neville Pringle said: "I wasn't in the day when he is said to have come in, I never saw him. But to be honest I wouldn't have recognised him anyway.

"It was put on Facebook and people are talking about him being here. I don't know if it was a case of mistaken identity or not.

"If it was him, I'd find it quite bizarre, however, if it was, he chose the right shop to get all his supplies."

If Jude Law did visit Allendale, he is not the only famous person to have visited the Co-op store over the years.

Mr Pringle added: "Just a few months ago Dr Who actor John Levene, who played Sergeant Benton in the original Doctor Who series, was in our store. There is a sci-fi museum that has recently opened here, that includes Doctor Who memorabilia, and the actor was there at the opening.

"He came in, along with some Stormtroopers and an 8ft Wookiee. John Levene did buy something that day but I don't know what.

"Another famous person who has been in here a few times before was Jerome Flynn from Robson (Green) and Jerome. He had a family member who lived here and there was a fan club set up here when he was quite famous when Soldier Soldier was on the television. I think it was his sister who lived in Allendale and I know he came into the Co-op a few times!'

Helen Newsome, Allendale's clerk to the Parish Council, said: "I heard that Jude Law had been in the Co-op. It was put on social media and lots of people are talking about it.

"I don't know if it is true or not but if he did come here then it is a place where he wouldn't be bothered. He could have chosen Allendale for the peace and tranquility and of course it's a beautiful place to visit."

Neil Cole, curator of The Museum of Classic Sci-Fi, said: "I had heard that Jude Law was in town but sadly he didn't come to the museum. I haven't got any signage up in the centre as yet, but Fin planning on doing that, just to direct people from the centre to the museum. The museum is doing really well and was packed just before New Year, we have had over 700 visitors since we opened in October. I'm sure if Jude Law had seen any signage and realised a sci-fi museum was around the corner, he would have come in. He's been in a few good sci-fi movies, including Gattaca, so I'm sure he would have found it very interesting."

Did you spot Jude Law in Tynedale at the weekend? Have you any photos of him? Send them to

Caption: Jude Law has been spotted in Allendale