We liked it when the Beatles were complex, so why not the Doctor? 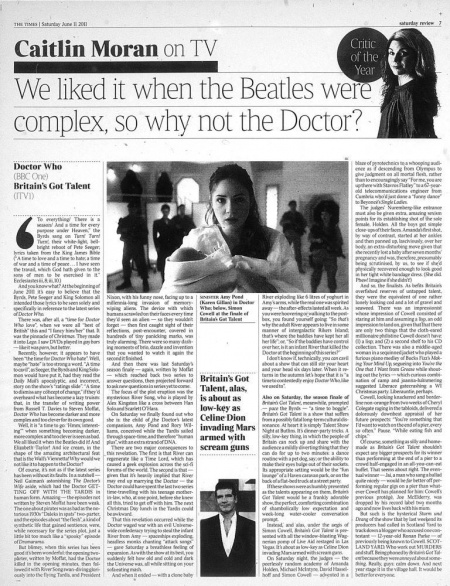 To everything/ There is a season/ And a time for every purpose under Heaven," the Byrds sang on Turn! Turn! Turn!, their white-light, bell-bright reboot of Pete Seeger; lyrics taken from the King James Bible ("A time to love and a time to hate; a time of war and a time of peace... I have seen the travail, which God hath given to the sons of men to be exercised in it." Ecclesiastes iii, 8; iii,10.)

And you know what? At the beginning of June 2011 it's easy to believe that the Byrds, Pete Seeger and King Solomon all intended those lyrics to be seen solely and specifically in reference to the latest series of Doctor Who.

Recently, however, it appears to have been "the time for Doctor Who hate". Well, maybe "hate" is too strong a word. "A time to cavil", as Seeger, the Byrds and King Solomon would have put it, had they read the Daily Mail's apocalyptic, and incorrect, story on the show's "ratings slide". "A time to dismiss any except of change," if they'd overheard what has become a lazy truism: that, in the transfer of writing power from Russell T. Davies to Steven Moffat, Doctor Who has become darker and more complex and too clever for its own good.

Well, it is "a time to go: 'Hmm, interesting when something becoming darker, more complex and too clever is seen as bad. We all liked it when the Beatles did it! And Elizabeth- Taylor! And ice cream, in the shape of the amazing architectural feat that is the Wall's Viennetta! Why would we not like it to happen to the Doctor?

Of course, it's not as if the latest series has been without its faults. In a nutshell —Neil Gaiman's astonishing The Doctor's Wife aside, which had the Doctor GETTING OFF WITH THE TARDIS in human form. Amazing — the episodes not written by Steven Moffat have been weak. The one about pirates was as bad as the notorious 1930s "Daleks in spats" two-parter, and the episodes about "the flesh", a kind of synthetic life that gained sentience, were, while necessary for the series plot, just a little bit too much like a "spooky" episode of Dramarama.

But blimey, when this series has been good it's been wonderful: the opening two-parter, written by Moffat, had the Doctor killed in the opening minutes, then followed it with River Song swan-diving gloriously into the flying Tardis, and President Nixon, with his funny nose, facing up to a millennia-long invasion of memory-wiping aliens. The device with which humans scrawled on their faces every time they'd seen an alien — so they wouldn't forget — then first caught sight of their reflections, post-encounter, covered in hundreds of tiny panicking marks, was truly alarming. There were so many dashing moments of brio, dazzle and invention that you wanted to watch it again the second it finished.

And then there was last Saturday's season finale — again, written by Moffat — which reached back two series to answer questions, then projected forward to ask new questions in series yet to come. The focus of the plot eruption was the mysterious River Song, who is played by Alex Kingston like a cross between Han Solo and Scarlett O'Hara.

On Saturday we finally found out who she is: the child of the Doctor's latest companions, Amy Pond and Rory Williams, conceived while the Tardis sailed through space-time, and therefore "human plus", with an extra strand of DNA. There are two major consequences to this revelation. The first is that River can regenerate like a Time Lord, which has caused a geek explosion across the sci-fi forums of the world. The second is that —given that it's heavily implied that River may end up marrying the Doctor — the Doctor could have spent the last two series time-travelling with his teenage mother-in-law, who, at one point, before she knew all this, tried to get off with him. The next Christmas Day lunch in the Tardis could be awkward.

That this revelation occurred while the Doctor waged war with an evil Universe-wide confederacy trying to steal the infant River from Amy — spaceships exploding, headless monks chanting "attack songs" — gave Saturday a breathless feeling of expansion. As with the show at its best, you suddenly felt how old and cold and dark the Universe was, all while sitting on your sofa eating mash.

And when it ended -- with a clone baby River exploding like 6 litres of yoghurt in Amy's arms, while the real one was spirited away— the after-effects lasted all week. As you were hoovering or walking to the postbox, you found yourself going: "So that's why the adult River appears to live in some manner of intergalactic Rikers Island; that's where the baddies have kept her all her life"; or, "So if the baddies have control over her, is it an infant River that killed the Doctor at the beginning of this series?"

don't know if, technically, you can cavil about a show that can still stir your heart and your head six days later. When it returns in the autumn let's hope that it is "a time to contentedly enjoy Doctor Who, like we used to".

Caption: SINISTER Amy Pond (Karen Gillan) in Doctor Who; below, Simon Cowell at the finale Of Britain's Got Talent