We wouldn't dare taunt a Time Lord with a spoiler 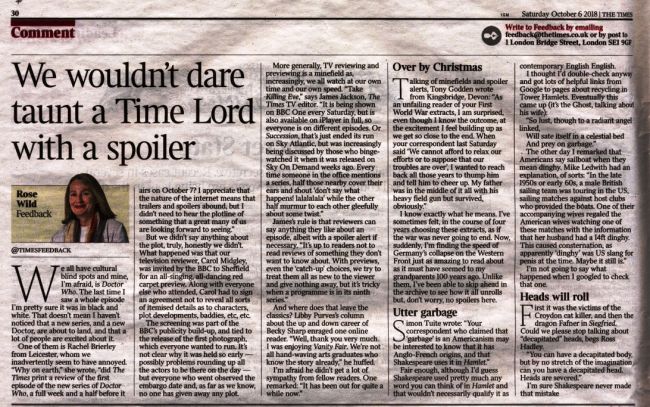 We all have cultural blind spots and mine, I'm afraid, is Doctor Who. The last time I saw a whole episode I'm pretty sure it was in black and white. That doesn't mean I haven't noticed that a new series, and a new Doctor, are about to land, and that a lot of people are excited about it.

One of them is Rachel Brierley from Leicester, whom we inadvertently seem to have annoyed. "Why on earth," she wrote, "did The Times print a review of the first episode of the new series of Doctor Who, a full week and a half before it airs on October 7? I appreciate that the nature of the internet means that trailers and spoilers abound, but I didn't need to hear the plotline of something that a great many of us are looking forward to seeing."

But we didn't say anything about the plot, truly, honestly we didn't. What happened was that our television reviewer, Carol Midgley, was invited by the BBC to Sheffield for an all-singing, all-dancing red carpet preview. Along with everyone else who attended, Carol had to sign an agreement not to reveal all sorts of itemised details as to characters, plot developments, baddies, etc, etc.

The screening was part of the BBC's publicity build-up, and tied to the release of the first photograph, which everyone wanted to run. It's not clear why it was held so early — possibly problems rounding up all the actors to be there on the day but everyone who went observed the embargo date and, as far as we know, no one has given away any plot.

More generally, TV reviewing and previewing is a minefield as, increasingly, we all watch at our own time and our own speed. "Take Killing Eve," says James Jackson, The Times TV editor. "It is being shown on BBC One every Saturday, but is also available on iPlayer in full, so everyone is on different episodes. Or Succession, that's just ended its run on Sky Atlantic, but was increasingly being discussed by those who binge-watched it when it was released on Sky On Demand weeks ago. Every time someone in the office mentions a series, half those nearby cover their ears and shout 'don't say what happens! lalalalala' while the other half murmur to each other gleefully about some twist."

James's rule is that reviewers can say anything they like about an episode, albeit with a spoiler alert if necessary. "It's up to readers not to read reviews of something they don't want to know about. With previews, even the 'catch-up' choices, we try to treat them all as new to the viewer and give nothing away, but it's tricky when a programme is in its ninth series!'

And where does that leave the classics? Libby Purves's column about the up and down career of Becky Sharp enraged one online reader. "Well, thank you very much. I was enjoying Vanity Fair. Were not all hand-waving arts graduates who know the story already," he huffed.

I'm afraid he didn't get a lot of sympathy from fellow readers. One remarked: "It has been out for quite a while now."