Weird Dalek Is A Practical Invention 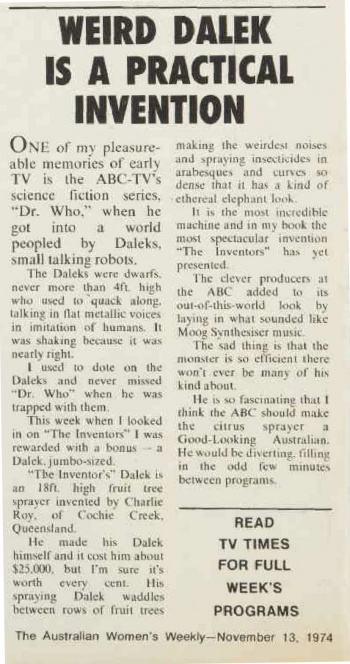 ONE of my pleasure able memories of early TV is the ABC-TV's science fiction series, "Dr. Who," when he got into a world peopled by Daleks, small talking robots.

The Daleks were dwarfs, never more than 4ft. high who used to quack along, talking in flat metallic voices in imitation of humans. It was shaking because it was nearly right.

I used to dote on the Daleks and never missed "Dr. Who" when he was trapped with them.

This week when I looked in on "The Inventors" I was rewarded with a bonus - a Dalek. jumbo-sized.

He made his Dalek himself and it cost him about $25,000, but I'm sure it's worth every cent. His spraying Dalek waddles between rows of fruit trees making the weirdest noises and spraying insecticides in arabesques and curves so dense that it has a kind of ethereal elephant look.

It is the most incredible machine and in my book the most spectacular invention "The Inventors" has yet presented.

The clever producers at the ABC added to its out-of-this-world look by laying in what sounded like Moog Synthesiser music.

The sad thing is that the monster is so efficient there won't ever be many of his kind about.

He is so fascinating that I think the ABC should make the citrus sprayer a Good-Looking Australian. He would be diverting, filling in the odd few minutes between programs.