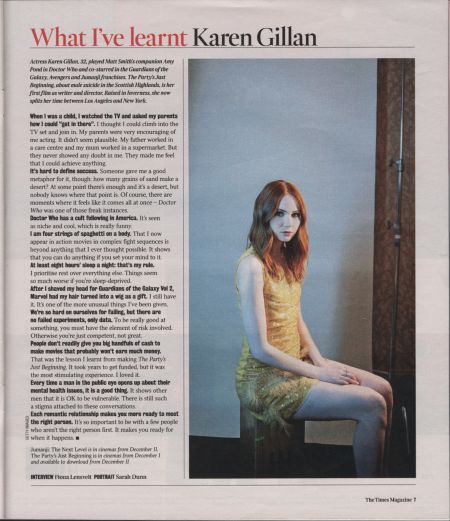 Actress Karen Gillan. 32. played Matt Smith's companion Amy Pond in Doctor Who and co-starred in the Guardians of the Galaxy, Avengers and Jumanji franchises. The Party's Just Beginning about male suicide in the Scottish Highlands, is her first film as writer and director. Raised in Inverness, she now splits her time between Los Angeles and New York.

When I was a child, I watched the TV and asked my parents how I could "get in there".

I thought I could climb into the TV set and join in. My parents were very encouraging of me acting. It didn't seem plausible. My father worked in a care centre and my mum worked in a supermarket. But they never showed any doubt in me. They made me feel that I could achieve anything.

It's hard to define success.

Someone gave me a good metaphor for it, though: how many grains of sand make a desert? At some point there's enough and it's a desert, but nobody knows where that point is. Of course, there are moments where it feels like it comes all at once — Doctor Who was one of those freak instances.

Doctor Who has a cult following in America.

It's seen as niche and cool, which is really funny.

I am four strings of spaghetti on a body.

That I now appear in action movies in complex fight sequences is beyond anything that I ever thought possible. It shows that you can do anything if you set your mind to it.

At least eight hours' sleep a night: that's my rule.

I prioritise rest over everything else. Things seem so much worse if you're sleep-deprived.

After I shaved my head for Guardians of the Galaxy Vol 2, Marvel had my hair turned into a wig as a gift.

I still have it. It's one of the more unusual things I've been given.

We're so hard on ourselves for failing, but there are no failed experiments, only data.

To be really good at something, you must have the element of risk involved. Otherwise you're just competent, not great.

People don't readily give you big handfuls of cash to make movies that probably won't earn much money.

That was the lesson I learnt from making The Party's Just Beginning. It took years to get funded, but it was the most stimulating experience. I loved it.

Every time a man in the public eye opens up about their mental health issues, it is a good thing.

It shows other men that it is OK to be vulnerable. There is still such a stigma attached to these conversations.

Each romantic relationship makes you more ready to meet the right person.

It's so important to be with a few people who aren't the right person first. It makes you ready for when it happens.