What is the superpower of 'Torchwood' star Barrowman? His fan connection 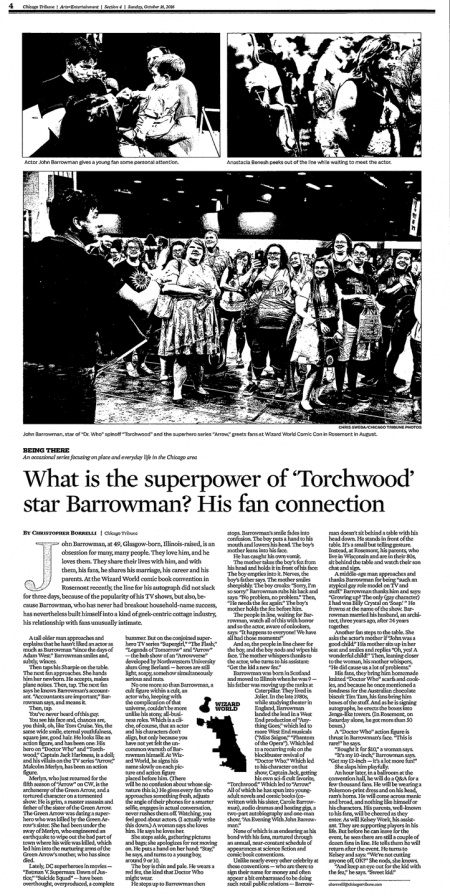 John Barrowman, at 49, Glasgow-born, Illinois-raised, is an obsession for many, many people. They love him, and he loves them. They share their lives with him, and with them, his fans, he shares his marriage, his career and his parents. At the Wizard World comic book convention in Rosemont recently, the line for his autograph did not slack for three days, because of the popularity of his TV shows, but also, because Barrowman, who has never had breakout household-name success, has nevertheless built himself into a kind of geek-centric cottage industry, his relationship with fans unusually intimate.

A tall older man approaches and explains that he hasn't liked an actor as much as Barrowman "since the days of Adam West." Barrowman smiles and, subtly, winces.

Then taps his Sharpie on the table. The next fan approaches. She hands him her newborn. He accepts, makes plane noises. Then, tap. The next fan says he knows Barrowman's accountant. "Accountants are important," Barrowman says, and means it.

You've never heard of this guy.

You see his face and, chances are, you think, oh, like Tom Cruise. Yes, the same wide smile, eternal youthfulness, square jaw, good hair. He looks like an action figure, and has been one: His hero on "Doctor Who" and "Torchwood," Captain Jack Harkness, is a doll; and his villain on the TV series "Arrow," Malcolm Merlyn, has been an action figure.

No one more so than Barrowman, a cult figure within a cult, an actor who, keeping with the complication of that universe, couldn't be more unlike his stony, all-business roles. Which is a cliche, of course, that an actor and his characters don't align, but only because you have not yet felt the uncommon warmth of Barrowman himself. At Wizard World, he signs his name slowly on each picture and action figure placed before him. (There will be no confusion about whose signature this is.) He gives every fan who approaches something fresh, adjusts the angle of their phones for a smarter selfie, engages in actual conversation, never rushes them off. Watching, you feel good about actors. (I actually write this down.) A woman says she loves him. He says he loves her.

She steps aside, gathering pictures and bags; she apologizes for not moving on. He puts a hand on her hand: "Stay," he says, and turns to a young boy, around 9 or 10.

The boy is thin and pale. He wears a red fez, the kind that Doctor Who might wear.

He steps up to Barrowman then stops. Barrowman's smile fades into confusion. The boy puts a hand to his mouth and lowers his head. The boy's mother leans into his face.

He has caught his own vomit.

The mother takes the boy's fez from his head and holds it in front of his face: The boy empties into it. Nerves, the boy's father says. The mother smiles sheepishly. The boy croaks: "Sorry, I'm so sorry." Barrowman rubs his back and says: "No problem, no problem." Then, "He needs the fez again." The boy's mother holds the fez before him.

The people in line, waiting for Barrowman, watch all of this with horror and so the actor, aware of onlookers, says: "It happens to everyone! We have all had those moments!"

And so, the people in line cheer for the boy, and the boy nods and wipes his face. The mother whispers thanks to the actor, who turns to his assistant: "Get the kid a new fez."

Barrowman was born in Scotland and moved to Illinois when he was 9 -- his father was moving up the ranks at Caterpillar. They lived in Joliet. In the late 1980s, while studying theater in England, Barrowman landed the lead in a West End production of "Anything Goes," which led to more West End musicals ("Miss Saigon," "Phantom of the Opera"). Which led to a recurring role on the blockbuster revival of "Doctor Who." Which led to his character on that show, Captain Jack, getting his own sci-fi cult favorite, "Torchwood." Which led to "Arrow." All of which he has spun into young-adult novels and comic books (co-written with his sister, Carole Barrowman), audio dramas and hosting gigs, a two-part autobiography and one-man show, "An Evening With John Barrowman."

None of which is as endearing as his bond with his fans, nurtured through an annual, near-constant schedule of appearances at science fiction and comic book conventions.

Unlike nearly every other celebrity at these conventions -- who are there to sign their name for money and often appear a bit embarrassed to be doing such retail public relations -- Barrowman doesn't sit behind a table with his head down. He stands in front of the table. It's a small but telling gesture. Instead, at Rosemont, his parents, who live in Wisconsin and are in their 80s, sit behind the table and watch their son chat and sign.

A middle-age man approaches and thanks Barrowman for being "such an atypical gay role model on TV and stuff." Barrowman thanks him and says: "Growing up? The only (gay character) I had was Billy Crystal on 'Soap.' " He frowns at the name of the show. Barrowman married his husband, an architect, three years ago, after 24 years together.

Another fan steps to the table. She asks the actor's mother if "John was a good child." His mother sits up in her seat and smiles and replies "Oh, yes! A wonderful child!" Then, leaning closer to the woman, his mother whispers, "He did cause us a lot of problems."

His fans, they bring him homemade knitted "Doctor Who" scarfs and cookies, and because he once mentioned a fondness for the Australian chocolate biscuit Tim Tam, his fans bring him boxes of the stuff. And as he is signing autographs, he erects the boxes into Jenga-like towers. (In Rosemont, on Saturday alone, he got more than 50 boxes.)

A "Doctor Who" action figure is thrust in Barrowman's face. "This is rare!" he says.

She slaps him playfully.

An hour later, in a ballroom at the convention hall, he will do a Q&A for a few thousand fans. He will be wearing a Pokemon-print dress and on his head, ram's horns. He will come across manic and broad, and nothing like himself or his characters. His parents, well-known to his fans, will be cheered as they enter. As will Kelsey Work, his assistant. They are supporting players in his life. But before he can leave for the event, he sees there are still a couple of dozen fans in line. He tells them he will return after the event. He turns to Kelsey and says: "We're not cutting anyone off, OK?" She nods, she knows.