What the Doctor ordered (Radio Times) 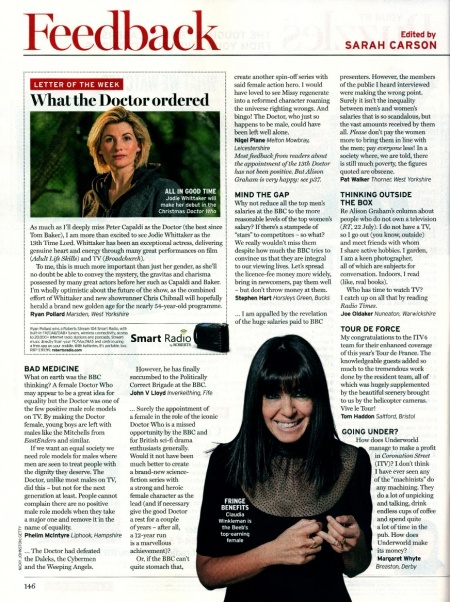 ALL IN GOOD TIME

As much as I'll deeply miss Peter Capaldi as the Doctor (the best since Tom Baker), I am more than excited to see Jodie Whittaker as the 13th Time Lord. Whittaker has been an exceptional actress, delivering genuine heart and energy through many great performances on film (Adult Life Skills) and TV (Broadchurch).

To me, this is much more important than just her gender, as she'll no doubt be able to convey the mystery, the gravitas and charisma possessed by many great actors before her such as Capaldi and Baker. I'm wholly optimistic about the future of the show, as the combined effort of Whittaker and new showrunner Chris Chibnall will hopefully herald a brand new golden age for the nearly 54-year-old programme.

What on earth was the BBC thinking? A female Doctor Who may appear to be a great idea for equality but the Doctor was one of the few positive male role models on TV. By making the Doctor female, young boys are left with males like the Mitchells from EastEnders and similar.

If we want an equal society we need role models for males where men are seen to treat people with the dignity they deserve. The Doctor, unlike most males on TV, did this - but not for the next generation at least. People cannot complain there are no positive male role models when they take a major one and remove it in the name of equality.

... The Doctor had defeated the Daleks, the Cybermen and the Weeping Angels.

However, he has finally succumbed to the Politically Correct Brigade at the BBC.

... Surely the appointment of a female in the role of the iconic Doctor Who is a missed opportunity by the BBC and for British sci-fi drama enthusiasts generally. Would it not have been much better to create a brand-new science-fiction series with a strong and heroic female character as the lead (and if necessary give the good Doctor a rest for a couple of years - after all, a 12-year run is a marvellous achievement)?

Or, if the BBC can't quite stomach that, create another spin-off series with said female action hero. I would have loved to see Missy regenerate into a reformed character roaming the universe righting wrongs. And bingo! The Doctor, who just so happens to be male, could have been left well alone.

Most feedback from readers about the appointment of the 13th Doctor has not been positive. But Alison Graham is very happy: see p37.

Caption: Jodie Whittaker will make her debut in the Christmas Doctor Who