When An Actor Turns His Back On Security 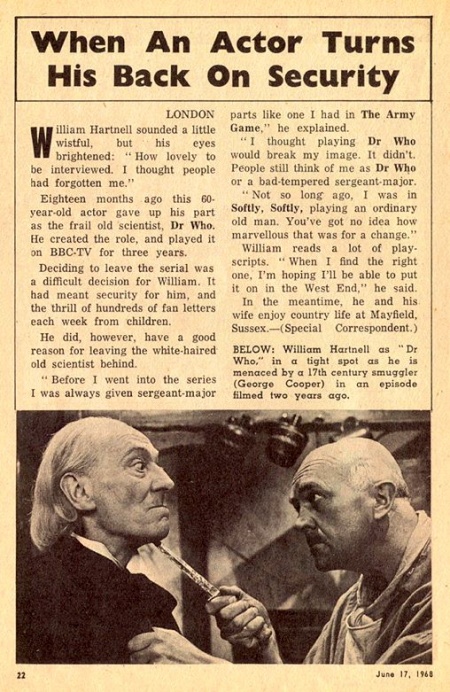 William Hartnell sounded a little wistful, but his eyes brightened: "How love, to be interviewed. I thought people had forgotten me."

Eighteen months ago this 60-year-old actor gave up his part as the frail old scientist, Dr Who. He created the role, and played it on BBC-TV for three years.

Deciding to leave the serial was a difficult decision for William. It had meant security for him, and the thrill of hundreds of fan letters each week from children.

He did, however, have a good reason for leaving the white-haired old scientist behind.

"Before I went into the series was always given sergeant major parts like one I had in The Army Game," he explained.

"I thought playing Dr Who would break my image. It didn't. People still think of me as Dr Who or a bad-tempered sergeant-major. "Not so long ago, I was in Softly, Softly, playing an ordinary old man. You've got no idea how marvellous that was for a change."

William reads a lot of playscripts. "When I find the right one, I'm hoping I'll be able to put it on in the West End," he said. In the meantime, he and his wife enjoy country life at Mayfield, Sussex...(Special Correspondent.)

Caption: William Hartnell as "Dr Who," in a tight spot as he is menaced by a 17th century smuggler (George Cooper) in an episode filmed two years ago.