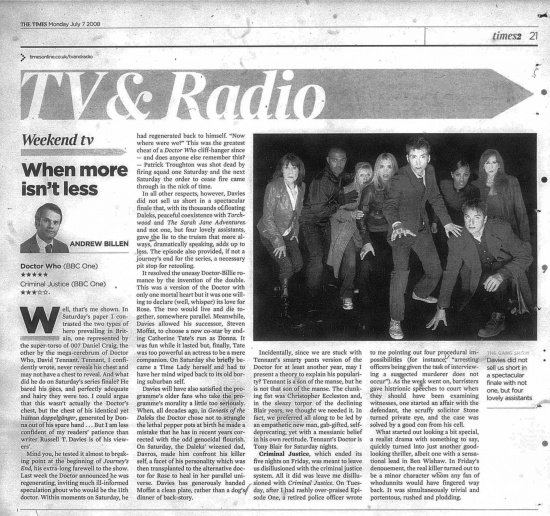 Well, that's me shown. In Saturday's paper I contrasted the two types of hero prevailing in Britain, one represented by the super-torso of 007 Daniel Craig, the other by the mega-cerebrum of Doctor Who, David Tennant. Tennant, I confidently wrote, never reveals his chest and may not have a chest to reveal. And what did he do on Saturdays series finale? He bared his pets, and perfectly adequate and hairy they were too. I could argue that this wasn't actually the Doctor's chest, but the chest of his identical yet human doppelganger, generated by Donna out of his spare hand ... But I am less confident of my readers' patience than writer Russell T. Davies is of his viewers'.

Mind you, he tested it almost to breaking point at the beginning of Journey's End, his extra-long farewell to the show. Last week the Doctor announced he was regenerating, inviting much ill-informed speculation about who would be the 11th doctor. Within moments on Saturday, he had regenerated back to himself. "Now where were we?" This was the greatest cheat of a Doctor Who cliff-hanger since — and does anyone else remember this? Patrick Troughton was shot dead by firing squad one Saturday and the next Saturday the order to cease fire came through in the nick of time.

In all other respects, however, Davies did not sell us short in a spectacular finale that, with its thousands of floating Daleks, peaceful coexistence with Torchwood and The Sarah Jane Adventures. and not one, but four lovely assistants, gave the lie to the truism that more always, dramatically speaking, adds up to less. The episode also provided, if not a journey's end for the series, a necessary pit stop for retooling.

It resolved the uneasy Doctor-Billie romance by the invention of the double. This was a version of the Doctor with only one mortal heart but it was one willing to declare (well, whisper) its love for Rose. The two would live and die together, somewhere parallel. Meanwhile, Davies allowed his successor, Steven Moffat, to choose a new co-star by ending Catherine Tate's run as Donna. It was fun while it lasted but, finally, Tate was too powerful an actress to be a mere companion. On Saturday she briefly became a Time Lady herself and had to have her mind wiped back to its old boring suburban self.

Davies will have also satisfied the programme's older fans who take the programme's morality a little too seriously. When, all decades ago, in Genesis of the Daleks the Doctor chose not to strangle the lethal pepper pots at birth he made a mistake that he has in recent years corrected with the odd genocidal flourish On Saturday, the Daleks' wizened dad, Davros, made him confront his killer self, a facet of his personality which was then transplanted to the alternative doctor for Rose to heal in her parallel universe. Davies has generously handed ... Moffat a clean plate, rather than a dog's/ dinner of back-story.

Incidentally, since we are stuck with Tennant's smarty pants version of the Doctor for at least another year, may I present a theory to explain his popularity? Tennant is a son of the manse, but he is not that son of the manse. The clanking fist was Christopher Eccleston and, in the sleazy torpor of the declining Blair years, we thought we needed it In fact, we preferred all along to be led by an empathetic new man, gab-gifted, self-deprecating, yet with a messianic belief in his own rectitude. Tennant's Doctor is Tony Blair for Saturday nights.