Which Way to head if you want to see unique exhibits 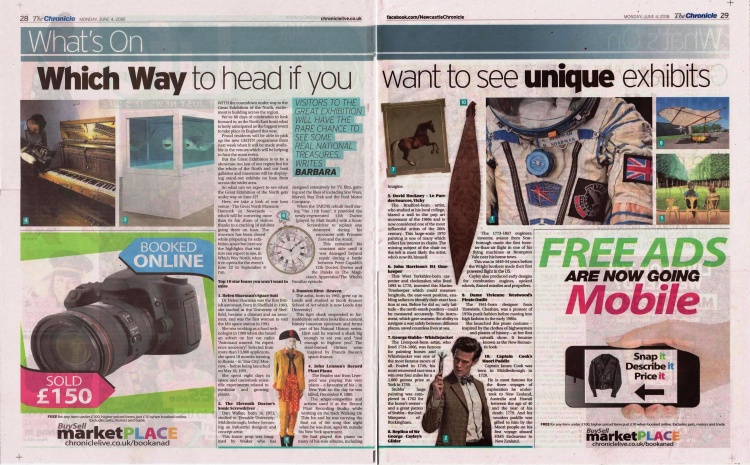 WITH the countdown under way to the Great Exhibition of the North, excitement is building across the region.

We've 80 days of celebration to look forward to, as the North East hosts what is hotly anticipated as the biggest event to take place in England this year.

Proud residents will be able to pick up the new GEOTN programme from next week when it will be made available in the venues which will be helping to host the main event.

But the Great Exhibition is to be a showcase not just of our region but for the whole of the North and our host galleries and museums will be displaying stand-out exhibits on loan from across the wider area.

So what can we expect to see when the Great Exhibition of the North gets under way on June 22?

Here, we take a look at one host venue - The Great North Museum: Hancock in Newcastle which will be cornering more than its fair share of visitors thanks to a cracking 10 exhibits going there on loan. The museum has been closed while preparing its exhibition space but here are the highlights that visitors can expect to see, in Which Way North, when it re-opens for the event's June 22 to September 9 run.

This iconic prop was imagined by Walker who has designed extensively for TV, film, gaming and the likes of including Star Wars, Marvel, Star Trek and the Ford Motor Company.

When the TARDIS rebuilt itself during "the 11th hour",' it provided the newly-regenerated llth Doctor (played by Matt Smith) with a Sonic Screwdriver to replace one destroyed during his encounter with Prisoner Zero and the Atraxi.

This remained his constant aide until it was damaged beyond repair during a battle between Peter Capaldi's 12th Doctor, Davros and the Daleks in The Magician's Apprentice/The Witch's Familiar episode.