Whittaker's new Doctor watched by 8.2m on her first night 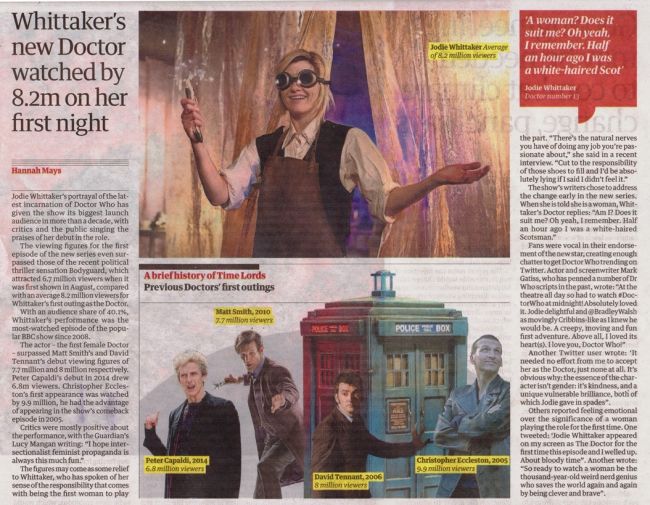 Jodie Whittaker's portrayal of the latest incarnation of Doctor Who has given the show its biggest launch audience in more than a decade, with critics and the public singing the praises of her debut in the role.

The viewing figures for the first episode of the new series even surpassed those of the recent political thriller sensation Bodyguard, which attracted 6.7 million viewers when it was first shown in August, compared with an average 8.2 million viewers for Whittaker's first outing as the Doctor.

With an audience share of 40.1%, Whittaker's performance was the most-watched episode of the popular BBC show Since 2008.

The actor - the first female Doctor - surpassed Matt Smith's and David Tennant's debut viewing figures of 7.7 million and 8 million respectively. Peter Capaldi's debut in 2014 drew 6.8m viewers. Christopher Eccles-ton's first appearance was watched by 9.9 million, he had the advantage of appearing in the show's comeback episode in 2005

Critics were mostly positive about the performance, with the Guardian's Lucy Mangan writing: "I hope inter-sectionalist feminist propaganda is always this much fun?

The figures may come as some relief to Whittaker, who has spoken of her sense of the responsibility that comes with being the first woman to play the part. "There's the natural nerves you have of doing any job you're passionate about," she said in a recent interview. "Cut to the responsibility of those shoes to fill and I'd be absolutely lying if I said I didn't feel it?

The show's writers chose to address the change early in the new series. When she is told she is a woman, Whit-taker's Doctor replies: "Am I? Does it suit me? Oh yeah, I remember. Half an hour ago I was a white-haired Scotsman."

Fans were vocal in their endorsement of the new star, creating enough chatter to get Doctor Who trending on Twitter. Actor and screenwriter Mark Gatiss, who has penned a number of Dr Who scripts in the past, wrote: "At the theatre all day so had to watch #DoctorWho at midnight! Absolutely loved it. Jodie delightful and @BradleyWalsh as movingly Cribbins-like as I knew he would be. A creepy, moving and fun first adventure. Above all, I loved its heart(s). I love you, Doctor Who!"

Another Twitter user wrote: It needed no effort from me to accept her as the Doctor, just none at all. It's obvious why: the essence of the character isn't gender: it's kindness, and a unique vulnerable brilliance, both of which Jodie gave in spades".

Others reported feeling emotional over the significance of a woman playing the role for the first time. One tweeted: 'Jodie Whittaker appeared on my screen as The Doctor for the first time this episode and I welled up. About bloody time". Another wrote: "So ready to watch a woman be the thousand-year-old weird nerd genius who saves the world again and again by being clever and brave".