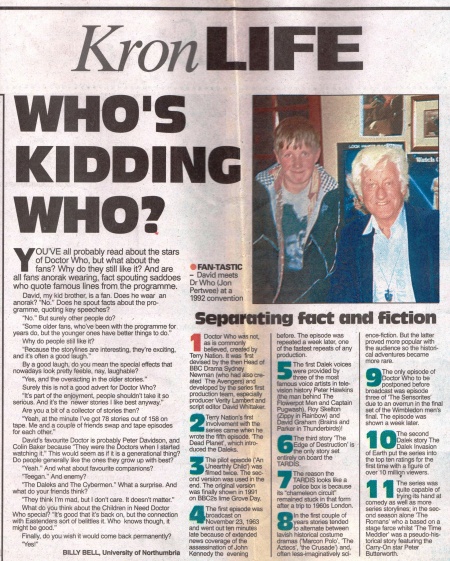 YOU'VE all probably read about the stars of Doctor Who, but what about the fans? Why do they still like it? And are all fans anorak wearing, fact spouting saddoes who quote famous lines from the programme.

David, my kid brother, is a fan. Does he wear an anorak? "No." Does he spout facts about the programme, quoting key speeches?

"No." But surely other people do?

"Some older fans, who've been with the programme for years do, but the younger ones have better things to do." Why do people still like it?

"Because the storylines are interesting, they're exciting, and it's often a good laugh."

By a good laugh, do you mean the special effects that nowadays look pretty feeble, nay, laughable?

"Yes, and the overacting in the older stories."

Surely this is not a good advert for Doctor Who?

"It's part of the enjoyment, people shouldn't take it so serious. And it's the newer stories I like best anyway." Are you a bit of a collector of stories then?

"Yeah, at the minute I've got 78 stories out of 158 on tape. Me and a couple of friends swap and tape episodes for each other."

David's favourite Doctor is probably Peter Davidson, and Colin Baker because "They were the Doctors when I started watching it." This would seem as if it is a generational thing? Do people generally like the ones they grow up with best?

"Yeah." And what about favourite companions?

"The Daleks and The Cybermen." What a surprise. And what do your friends think?

What do you think about the Children in Need Doctor Who special? "It's good that it's back on, but the connection with Eastenders sort of belittles it. Who knows though, it might be good."

Finally, do you wish it would come back permanently? "Yes!"

1 Doctor Who was not, as is commonly believed, created by Terry Nation. It was first devised by the then Head of BBC Drama Sydney Newman (who had also created The Avengers) and developed by the series first production team. especially producer Verity Lambert and script editor David Whittaker.

2 Terry Nation's first involvement with the series came when he wrote the fifth episode. 'The Dead Planet', which introduced the Daleks.

3 The pilot episode ('An Unearthly Child') was filmed twice. The second version was used in the end. The original version was finally shown in 1991 on BBC2's lime Grove Day.

4 The first episode was broadcast on November 23, 1963 and went out ten minutes late because of extended news coverage of the assassination of John Kennedy the evening before. The episode was repeated a week later, one of the fastest repeats of any production.

5 The first Dalek voices were provided by three of the most famous voice artists in television history Peter Hawkins (the man behind The Flowerpot Men and Captain Pugwash), Roy Skelton (Zippy in Rainbow) and David Graham (Brains and Parker in Thunderbirds)!

6 The third story 'The Edge of Destruction' is the only story set entirely on board the TARDIS.

7 The reason the TARDIS looks like a police box is because its chameleon circuit" remained stuck in that form after a trip to 1960s London.

8 In the first couple of years stories tended to alternate between lavish historical costume dramas ('Marco Polo', 'The Aztecs', 'The Crusade') and, often less-imaginatively science-fiction. But the latter proved more popular with the audience so the historical adventures became more rare.

9 The only episode of Doctor Who to be postponed before broadcast was episode three of 'The Sensorites' due to an overrun in the final set of the Wimbledon men's final. The episode was shown a week later.

10 The second Dalek story The Dalek Invasion of Earth put the series into the top ten ratings for the first time with a figure of over 10 million viewers.

11 The series was quite capable of trying its hand at comedy as well as more series storylines; in the second season alone 'The Romans' who a based on a stage farce whilst 'The Time Meddler' was a pseudo-historical story featuring the Carry-On star Peter Butterworth.