Who's Party Is It? The Doctor's 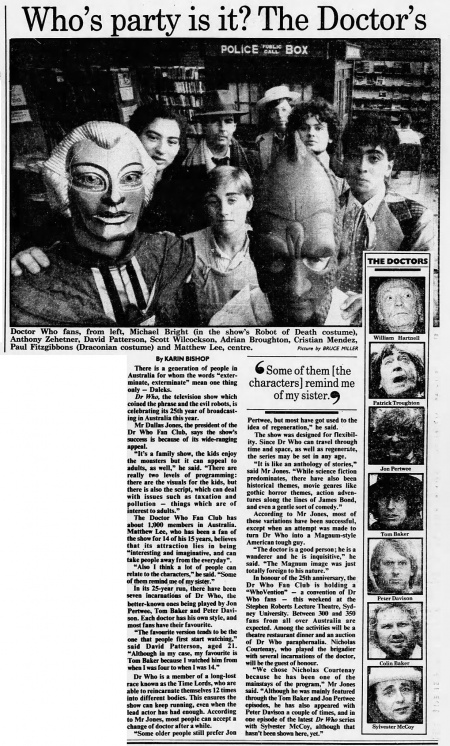 There is a generation of people in Australia for whom the words "exterminate, exterminate" mean one thing only - Daleks.

Dr Who, the television show which coined the phrase and the evil robots, is celebrating its 25th year of broadcasting in Australia this year.

Mr Dallas Jones, the president of the Dr Who Fan Club, says the show's success is because of its wide-ranging appeal.

"It's a family show, the kids enjoy the monsters but it can appeal to adults, as well," he said. "There are really two levels of programming: there are the visuals for the kids, but there is also the script, which can deal with issues such as taxation and pollution - things which are of interest to adults."

The Doctor Who Fan Club has about 1,000 members in Australia. Matthew Lee, who has been a fan of the show for 14 of his 15 years, believes that its attraction lies in being "interesting and imaginative, and can take people away from the everyday".

"Also I think a lot of people can relate to the characters," he said. "Some of them remind me of my sister."

In its 25-year run, there have been seven incarnations of Dr Who, the better-known ones being played by Jon Pertwee, Tom Baker and Peter Davison. Each doctor has his own style, and most fans have their favourite.

"The favourite version tends to be the one that people first start watching," said David Patterson, aged 21. "Although in my case, my favourite is Tom Baker because I watched him from when I was four to when I was 14."

Dr Who is a member of a long-lost race known as the Time Lords, who are able to reincarnate themselves 12 times into different bodies. This ensures the show can keep running, even when the lead actor has had enough. According to Mr Jones, most people can accept a change of doctor after a while.

"Some older people still prefer Jon Pertwee, but most have got used to the idea of regeneration," he said.

"Personally, I judge the quality of the acting and how well they fit the role. It is mainly the kids who find it difficult to accept."

The show was designed for flexibility. Since Dr Who can travel through time and space, as well as regenerate, the series may be set in any age and location.

"It is like an anthology of stories," said Mr Jones. "While science fiction predominates, there have also been historical themes, movie genres like gothic horror themes, action adventures along the lines of James Bond, and even a gentle sort of comedy."

According to Mr Jones, most of these variations have been successful, except when an attempt was made to turn Dr Who into a Magnum-style American tough guy.

"The doctor is a good person; he is a wanderer and he is inquisitive," he said. "The Magnum image was just totally foreign to his nature."

In honour of the 25th anniversary, the Dr Who Fan Club is holding a "WhoVention" - a convention of Dr Who fans - this weekend at the Stephen Roberts Lecture Theatre, Sydney University. Between 300 and 350 fans from all over Australia are expected. Among the activities will be a theatre restaurant dinner and an auction of Dr Who paraphernalia. Nicholas Courtenay, who played the brigadier with several incarnations of the doctor, will be the guest of honour.

"We chose Nicholas Courtenay because he has been one of the mainstays of the program," Mr Jones said. "Although he was mainly featured through the Tom Baker and Jon Pertwee episodes, he has also appeared with Peter Davison a couple of times, and in one episode of the latest Dr Who series with Sylvester McCoy, although that hasn't been shown here, yet."