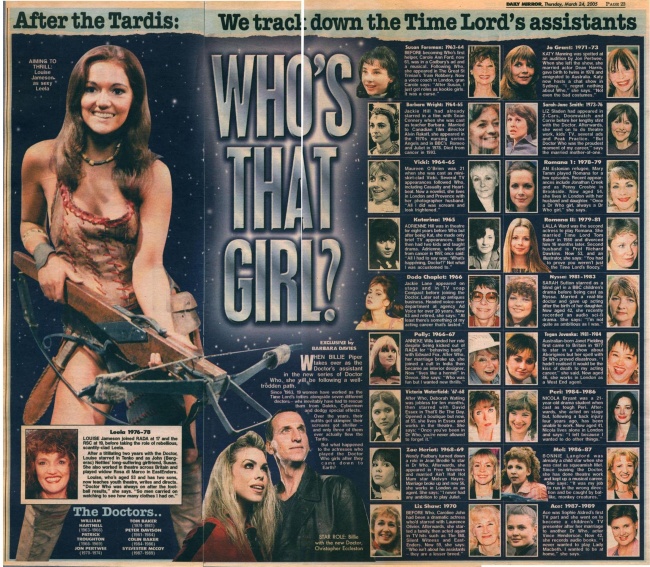 After the Tardis: We track down the Time Lord's Assistants

WHEN BILLIE Piper takes over as the Doctor's assistant in the new series of Doctor Who, she will be following a well-trodden path.

Since 1963, 19 women have worked as the Time Lord's totties alongside seven different doctors -- who inevitably have had to rescue Them from Daleks. Cybermen and dodgy special effects.

Over the years. their outfits got skimpier. their screams got shriller - and only three of them ever actually flew the Tardis.

But what happened to the actresses who played the Doctor Who girls after they came down to Earth?

BEFORE becoming Who's first helper, Carole Ann Ford. now 61, was in a Cadbury's ad and a musical. Following Who, she appeared in The Great St Trinians Train Robbery. Now a voice coach in London, gran Carole says: "After Susan, I just got roles as kookie girls. It was a curse."

Jackie Hill had already starred in a film with Sean Connery when she was cast as teacher Barbara. Married to Canadian film director Alvin Rakoff she appeared in the 1970s nursing series Angels and in BBC's Romeo and Juliet in 1978. Died from cancer in 1993.

Maureen O'Brien was 21 when she was cast as miniskirt-clad Vicki. Several TV appearances followed Who, including Casualty and Heartbeat. Now a novelist, she lives in London and Provence with her photographer husband. "All I did was scream and look frightened."

ADRIENNE Hill was in theatre for eight years before Who but after being Kat, she made only brief TV appearances. She then had two kids and taught drama. Adrienne, who died from cancer in 1997, once said: "All I had to say was: 'What's happening. Doctor?' Not what I was accustomed to."

Jackie Lane appeared on stage and in TV soap Compact before joining the Doctor. Later set up antiques business. Headed voice-over department al agency Ad Voice for over 20 years. Now 63 and retired, she says: "At least there's something of my acting career that's lasted."

ANNEKE Wills landed her role despite being kicked out of RADA for "behaving badly" with Edward Fox. After Who. her marriage broke up, she joined a cult in India then became an interior designer. Now -lives like a hermit" in Devon. She says: "Who was fun but I wanted new thrills."

After Who, Deborah Watling was jobless for ten months, then starred with David Essex in That'll Be The Day. Opened a boutique but now, at 55, she lives in Essex and works in the theatre. She says: "Once you've been in Dr Who, you're never allowed to forget it."

Wendy Padbury turned down a role in Jean Brodie to star in Dr Who. Afterwards. she I appeared in Free Wheelers and married Ain't Half Hot Mum star Melvyn Hayes. Marriage broke up and now 56, she works in London as an agent. She says: "I never had any ambition to play Juliet.

BEFORE Who, Caroline John had been a dramatic actress who'd starred with Laurence Olivier. Afterwards, she started a family, then acted again in TV hits such as The Bill. Silent Witness and EastEnders. Now 59, she says: "Who isn't about his assistants - they are a lesser breed."

KATY Manning was spotted at an audition by Jon Pertwee. When she left the show, she married actor Dean Harris, gave birth to twins in 1978 and emigrated to Australia. Katy now hosts a chat show in Sydney. "I regret nothing about Who," she says. "Not even the bad costumes."

LIZ Sladen had appeared in Z-Cars, Doomwatch and Corrie before her lengthy stint with the Doctor. Afterwards, she went on to do theatre work, kids' TV, several ads and Peak Practice. "But Doctor Who was the proudest moment of my career," says the married mother-of-one.

AN Estonian refugee, Mary Tamm played Romana for a few episodes. Recent appearances include Jonathan Creek and as Penny Crosbie in Brookside. Now aged 54, she lives in London with her husband and daughter. "Once a Dr Who girl, always a Dr Who girl." she says.

LALLA Ward was the second actress to play Romana. She married Time Lord Tom Baker in 1980 and divorced him 16 months later. Second husband is Prof Richard Dawkins. Now 53, and an illustrator, she says: "You had to prove you weren't just the Time Lord's floozy.

SARAH Sutton starred as a blind girl in a BBC children's drama before being cast as Nyssa. Married a real-life doctor and gave up acting after the birth of her daughter. Now aged 42, she recently recorded an audio sci-fi drama. She says: "I'm not quite as ambitious as I was."

Australian-born Janet Fielding first came to Britain in 1977 to star in a show about Aborigines but her spell with Dr Who proved disastrous. "I hadn't realised it would be the kiss of death to my acting career," she said. Now aged 46, she works in London as a West End agent.

NICOLA Bryant was a 21-year-old drama student when cast as tough Peri. Afterwards, she acted on stage but, following a back injury four years ago, has been unable to work. Now aged 41, Nicola lives alone in London and says: "I left because I wanted to do other things."

BONNIE Langford was already a child star when she was cast as squeamish Mel. Since leaving the Doctor, she has done theatre work and kept up a musical career. She says: "It was my job to run in the wrong direction and be caught by batlike, monkey creatures."

Ace was Sophie Aldred's first TV part and she went on to become a children's TV presenter after her marriage to another Dr Who, actor Vince Henderson. Now 42, she records audio books. "I never wanted to play Lady Macbeth. I wanted to be at home." she says.

LOUISE Jameson joined RADA at 17 and the RSC at 19, before taking the role of rebellious, scantily-clad Leela.

After a titillating two years with the Doctor, Louise starred in Tenko and as John (Bergerac) Nettles' long-suffering girlfriend, Susan. She also worked in theatre across Britain and played widow Rosa di Marco in EastEnders.

Louise, who's aged 53 and has two sons, now leaches youth theatre, writes and directs. "Doctor Who was always on after the football results," she says. "So men carried on watching to see how many clothes I had on."