Who's Who—with the new doctor 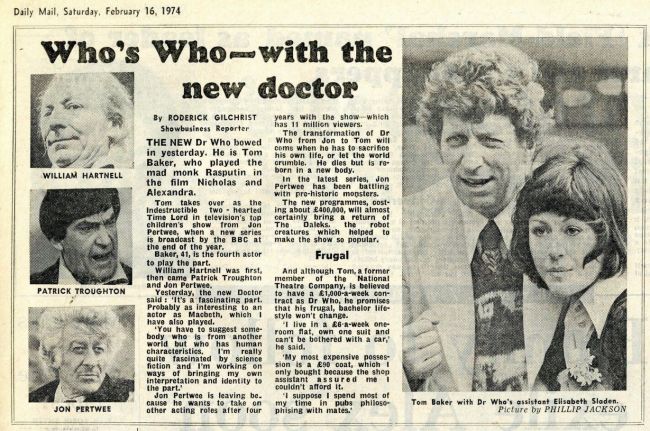 THE NEW Dr Who bowed in yesterday. He is Tom Baker, who played the mad monk Rasputin in the film Nicholas and Alexandra.

Tom takes over as the indestructible two - hearted Time Lord in television's top children's show from Jon Pertwee, when a new series is broadcast by the BBC at the end of the year.

Baker, 41, is the fourth actor to play the part.

Yesterday, the new Doctor said : 'It's a fascinating part. Probably as interesting to an actor as Macbeth, which I have also played.

'You have to suggest somebody who is from another world but who has human characteristics. I'm really quite fascinated by science fiction and I'm working on ways of bringing my own interpretation and identity to the part.'

Jon Pertwee is leaving because he wants to take on other acting roles after four years with the show which has 11 million viewers.

The transformation of Dr Who from Jon to Tom will come when he has to sacrifice his own life, or let the world crumble. He dies but is reborn in a new body.

In the latest series, Jon Pertwee has been battling with pre-historic monsters.

The new programmes, costing about £400,000, will almost certainly bring a return of The Daleks. the robot creatures which helped to make the show so popular.

And although Tom, a former member of the National Theatre Company, is believed to have a £1,000-a-week contract as Dr Who, he promises that his frugal, bachelor lifestyle won't change.

'My most expensive possession is a £90 coat, which I only bought because the shop assistant assured me I couldn't afford it.

'I suppose I spend most of my time in pubs philosophising with mates.'