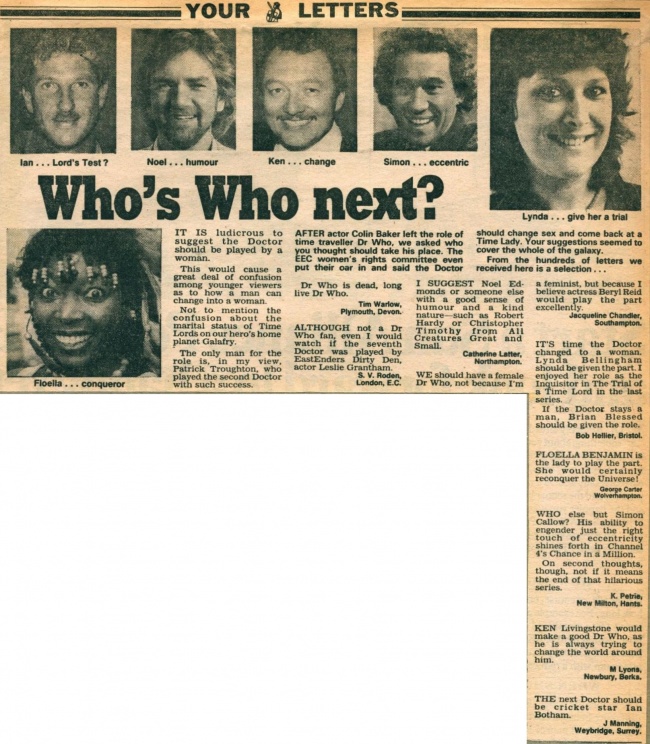 AFTER actor Colin Baker left the role of time traveller Dr Who, we asked who you thought should take his place. The EEC women's rights committee even put their oar in and said the Doctor should change sex and come back at a Time Lady. Your suggestions seemed to cover the whole of the galaxy.

From the hundreds of letters we received here is a selection ...

IT IS ludicrous to suggest the Doctor should be played by a woman.

This would cause a great deal of confusion among younger viewers as to how a man can change into a woman. Not to mention the confusion about the marital status of Time Lords on our hero's home planet Galafry.

The only man for the role is, in my view. Patrick Troughton. who played the second Doctor with such success.

Dr Who is dead, long live Dr Who.

ALTHOUGH not a Dr Who fan, even I would watch if the seventh Doctor was played by EastEnders Dirty Den, actor Leslie Grantham.

I SUGGEST Noel Edmonds or someone else with a good sense of humour and a kind nature—such as Robert Hardy or Christopher Timothy from All Creatures Great and Small.

WE should have a female Dr Who, not because I'm a feminist, but because I believe actress Beryl Reid would play the part excellently.

IT'S time the Doctor changed to a woman. Lynda Bellingham should be given the part. I enjoyed her role as the Inquisitor in The Trial of a Time Lord in the last series.

If the Doctor stays a man, Brian Blessed should be given the role.

FLOELLA BENJAMIN is the lady to play the part. She would certainly reconquer the Universe! osorge Carter Wolverhampton.

WHO else but Simon Callow? His ability to engender just the right touch of eccentricity shines forth in Channel 4's Chance in a Million.

On second thoughts. though, not if it means the end of that hilarious series.

KEN Livingstone would make a good Dr Who, as he is always trying to change the world around him.

THE next Doctor should be cricket star Ian Botham.