Who's a bit camp 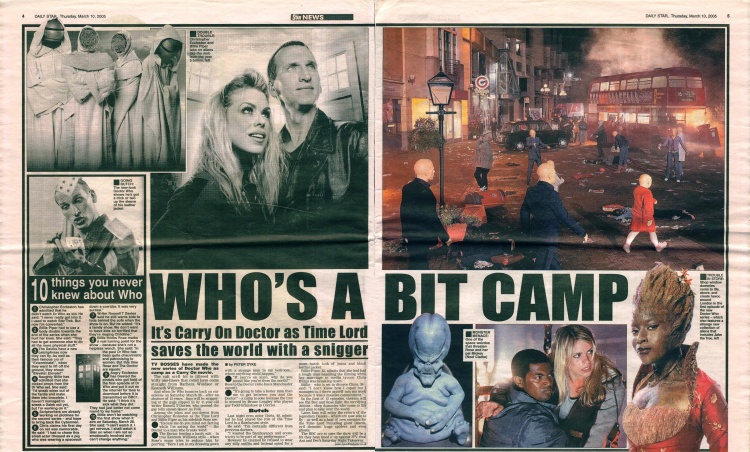 TV BOSSES have made the new series of Doctor Who as camp as a Carry On movie. The cult sci-fi hit is littered with witty one-liners that could have come straight from Barbara Windsor or Kenneth Williams.

And when Dr Who bounces back on our screens on Saturday March 26 - after an absence of 15 years - fans will be sniggering at the gags slipped in by 41-year-old writer Russell T Davies, who penned the gay telly smash Queer As Folk.

Among the jokes and put-downs from Christopher Eccleston as the Time Lord and Billie Piper as his sidekick Rose are:

Last night even actor Chris, 40, admitted he had played the role of the Time Lord in a flamboyant style.

"I wanted the flamboyancy and eccentricity to be part of my performance." However he claimed he refused to wear any silly outfits and instead opted for a more butch look of jeans and black leather jacket.

Billie Piper, 22, admits that she had had a tough time handling the filming while her marriage to media tycoon Chris Evans was breaking down.

Billie - who is set to divorce Chris, 36 said: "I don't know how I coped but I managed to. I threw myself into my work because it was a massive commitment." In the first of 13 episodes, viewers will see the Doc and Rose fight the terrifying Autons - shop dummies who come to life and plan to take over the world.

Later, fans will enjoy the return of the legendary Daleks - which are now able to fly - as well as a host of new enemies for the Time Lord including giant lizards, evil demons, huge spiders and even ghosts.

The BBC are so sure the show will be a hit they have lined it up against ITV rival Ant and Dec's Saturday Night Takeaway.

10 things you never knew about Who

GOING BUTCH: The new-look Doctor Who shows he's got a trick or two up the sleeve of his leather jacket

MONSTER MENACE: One of the space weirdos that threaten Rose and her pal Mickey (Noel Clarke)

TROUBLE IN STORE: Shop window dummies come to life, above, and create havoc around London in the first episode of the new Doctor Who series — which also features a strange new collection of aliens that includes Jabe the Tree, left