Who's egocentric, witty, humane, enigmatic? The Doctor ... Who! 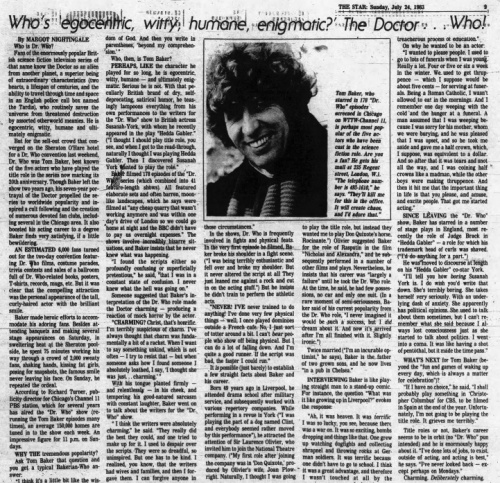 Fans of the enormously popular British science fiction television series of that name know the Doctor as an alien from another planet, a superior being of extraordinary characteristics (two hearts, a lifespan of centuries, and the ability to travel through time and space in an English police call box named the Tardis), who routinely saves the universe from threatened destruction by assorted otherworld meanies. He is egocentric, witty, humane, and ultimately enigmatic.

But for the sell-out crowd that converged on the Sheraton O'Hare hotel for Dr. Who convention last weekend, Dr. Who was Tom Baker, best known of the five actors who have played the title role in the series now marking its 20th anniversary. Though Baker left the show two years ago, his seven-year portrayal of the Doctor propelled the series to worldwide popularity and inspired a cult following and the creation of numerous devoted fan clubs, including several in the Chicago area. It also boosted his acting career to a degree Baker finds very satisfying, if a little bewildering.

AN ESTIMATED 6,000 fans turned out for the two-day convention featuring Dr. Who films, costume parades, trivia contests and sales of a ballroom full of Dr. Who-related books, posters, T-shirts, records, mugs, etc. But it was clear that the compelling attraction was the personal appearance of the tall, curly-haired actor with the brilliant smile.

Baker made heroic efforts to accommodate his adoring fans. Besides attending banquets and making several stage appearances on Saturday, in sweltering heat at the Sheraton pool-side, he spent 75 minutes working his way through a crowd of 2,000 sweaty fans, shaking hands, kissing fat girls, posing for snapshots, the famous smile never leaving his face. On Sunday, he repeated the ordeal.

According to Richard Turner, publicity director for Chicago's Channel 11 PBS station, which for several years has aired the Dr. Who" show (rerunning the Tom Baker episodes many times), an average 150,000 homes are tuned in to the show each week. An impressive figure for 11 p.m. on Sundays.

WHY THE tremendous popularity?

Ask Tom Baker that question and you get a typical Bakerian-Who answer:

"I think it's a little bit like the wisdom of God. And then you write in parentheses, 'beyond my comprehension.'"

Who, then, is Tom Baker?

PERHAPS, LIKE the character he played for so long, he is egocentric, witty, humane — and ultimately enigmatic. Serious he is not With that peculiarly British brand of dry, self-deprecating, satirical humor, he teasingly lampoons everything from his own performances to the writers for the "Dr. Who" show to British actress Susanah York, with whom he recently appeared in the play "Hedda Gabler." ("I thought I should play title role, you see, and when I got to the read-through, naturally I thought I was playing Hedda Gabler. Then I discovered Susanah York wanted to play the role."

Baker filmed 178 episodes of the "Dr. Who" series (which combined into 41 feature-length shows). All featured elaborate sets and often barren, moonlike landscapes, which he says were filmed at any cheap quarry that wasn't working anymore and was within one day's drive of London so we could go home at night and the BBC didn't have to pay us overnight expenses." The shows involve incredibly bizarre situations, and Baker insists that he never knew what was happening.

"I found the scripts either so profoundly confusing or superficially pretentious," he said, "that I was in a constant state of confusion. I never knew what the hell was going on."

Someone suggested that Baker's interpretation of the Dr. Who role made the Doctor charming — producing a reaction of mock horror by the actor.

"CHARMING? Christ, that's horrific. I'm terribly suspicious of charm. I've always thought that charm was fundamentally a bit of a racket. When I want to say something unkind, which is not often — I try to resist that — but when someone asks how I found someone I absolutely loathed, I say, 'I thought she was just... charming.' "

With his tongue planted firmly —and relentlessly — in his cheek, and tempering his good-natured sarcasm with constant laughter, Baker went on to talk about the writers for the "Dr. Who" show.

"I think the writers were absolutely charming," he said. "They really did the best they could, and one tried to make up for it. I used to despair over the scripts. They were so dreadful, so uninspired. But one has to be kind. I realized, you know, that the writers had wives and families, and then I forgave them. I can forgive anyone in those circumstances."

In the shows, Dr. Who is frequently involved in fights and physical feats. In the very first episode he filmed, Baker broke his shoulder in a fight scene. ("I was being terribly enthusiastic and fell over and broke my shoulder. But it never altered the script at all They just leaned me against a rock and cut in on the acting stuff.") But he insists he didn't train to perform the athletic acts.

"NEVER! I'VE never trained to do anything! I've done very few physical things — well, I once played dominoes outside a French cafe. No, I just sort of totter around a bit. I can't bear people who show off being physical. But 1 can do a lot of falling down. And I'm quite a good runner. If the script was bad, the faster I could run."

It is possible (just barely) to establish a few straight facts about Baker and his career.

Born 49 years ago in Liverpool, he attended drama school after military service, and subsequently worked with various repertory companies. While performing in a revue in York ("I was playing the part of a dog named Clint, and everybody seemed rather moved by this performance"), he attracted the attention of Sir Laurence Olivier, who invited him to join the National Theatre company. ("My first role after joining the company was in 'Don Quixote,' produced by Olivier's wife, Joan Plow-right. Naturally, I thought I was going to play the title role, but instead they wanted me to play Don Quixote's horse. Rocinante.") Olivier suggested Baker for the role of Rasputin in the film "Nicholas and Alexandra," and he subsequently performed in a number of other films and plays. Nevertheless, he insists that his career was "largely a failure" until he took the Dr. Who role. At the time, he said, he had few possessions, no car and only one suit. (In a rare moment of semi-seriousness, Baker said of his current popularity from the Dr. Who role, 1 never imagined it would be .such a success, but I did dream about it. And now it's arrived—after I'm all finished with it. Slightly ironic.")

Twice married ("I'm an incurable optimist," he says), Baker is the father of two grown sons, and he now lives "in a pub in Chelsea."

INTERVIEWING Baker is like playing straight man to a stand-up comic. For instance, the question "What was it like growing up in Liverpool" evokes the response:

"Ah, it was heaven. It was terrific I was so lucky, you see, because there was a war on. It was so exciting, bombs dropping and things like that. One grew up watching dogfights and collecting shrapnel and throwing rocks at German soldiers. It was terrific because one didn't have to go to school. I think it was a great advantage. and therefore I wasn't touched at all by the treacherous process of education."

On why he wanted to be an actor:

"I wanted to please people. I used to go to lots of funerals when I was young. Really a lot. Four or five or six a week in the winter. We used to get thruppence — which I suppose would be about five cents — for serving at funerals. Being a Roman Catholic, I wasn't allowed to eat in the mornings. And I remember one day weeping with the cold and the hunger at a funeral. A man assumed that I was weeping because I was sorry for his mother, whom we were burying, and he was pleased that I was upset, and so he took me aside and gave me a half crown, which, I suppose, was equivalent to a dollar. And so after that it was tears and snot all the way, and I was coining half crowns like a madman, while the other boys were making thruppence. And then it hit me that the important thing in life is that you please, and amuse, and excite people. That got me started acting."

SINCE LEAVING the "Dr. Who" show, Baker has starred in a number of stage plays in England, most recently the role of Judge Brack in "Hedda Gabler" — a role for which his trademark head of curls was shaved. ("I'd do anything for a part.")

He was moved to discourse at length on his "Hedda Gabler" co-star York.

"I'll tell you how boring Susanah York is. I do wish you'd write that down. She's terribly boring. She takes herself very seriously. With an underlying dash of anxiety. She apparently has political opinions. She used to talk about them sometimes, but I can't remember what she said because I always lost consciousness just as she Started to talk about politics. I went into a coma. It was like having a shot of pentothal, but it made the time pass."

WHAT'S NEXT for Tom Baker (beyond the "fun and games of waking up every day, which is always a matter for celebration")?

"If I have no choice," he said, "I shall probably play something in 'Christopher Columbus' for CBS, to be filmed in Spain at the end of the year. Unfortunately, I'm not going to be playing the title role. It grieves me terribly -

Title roles or not, Baker's career seems to be in orbit (no "Dr. Who" pun intended) and he is enormously happy about it. "I've done lots of jobs, to exist, outside of acting, and acting is best," he says. "I've never looked back — except perhaps on Mondays."

Caption: Tom Baker, who starred in 178 "Dr. Who" episodes screened in Chicago on WTTW-Channel 11, is perhaps most popular of the five actors who have been cast in the science fiction role. Are you a fan? He gets his mail at 235 Regent street, London, W.1. "The telephone number is 493-1610," he says. "They'll kill me for this in the office. It will create chaos, and I adore that."