Who's the daddy (The Stage) 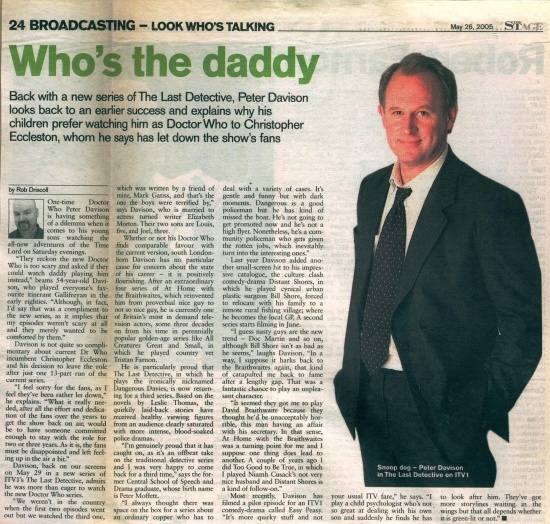 Back with a new series of The Last Detective, Peter Davison looks back to an earlier success and explains why his children prefer watching him as Doctor Who to Christopher Eccleston, whom he says has let down the show's fans

Who Peter Davison is having something of a dilemma when it comes to his young sons watching the all-new adventures of the Time Lord on Saturday evenings.

"They reckon the new Doctor Who is too scary and asked if they could watch daddy playing him instead," beams 54-year-old Davison, who played everyone's favourite itinerant Gallifreyan in the early eighties. "Although, in fact, I'd say that was a compliment to the new series, as it implies that my episodes weren't scary at all and they merely wanted to be comforted by them."

Davison is not quite so complimentary about current Dr Who incumbent Christopher Eccleston and his decision to leave the role after just one 13-part run of the current series.

"I feel sorry for the fans, as feel they've been rather let down," he explains. "What it really needed, after all the effort and dedication of the fans over the years to get the show back on air, would be to have someone committed enough to stay with the role for two or three years. As it is, the fans must be disappointed and left feeling up in the air a bit."

Davison, back on our screens on May 29 in a new series of ITV1's The Last Detective, admits he was more than eager to watch the new Doctor Who series.

"We weren't in the country when the first two episodes went out but we watched the third one, which was written by a friend of mine, Mark Gatiss, and that's the one the boys were terrified by," says Davison, who is married to actress turned writer Elizabeth Morton. Their two sons are Louis, five, and Joel, three.

Whether or not his Doctor Who finds comparable favour with the current version, south London-born Davison has no particular cause for concern about the state of his career — it is positively flourishing. After an extraordinary four series of At Home with the Braithwaites, which reinvented him from proverbial nice guy to not so nice guy, he is currently one of Britain's most in demand television actors, some three decades on from his time in perennially popular golden-age series like All Creatures Great and Small, in which he played country vet Tristan Farnon.

He is particularly proud that The Last Detective, in which he plays the ironically nicknamed Dangerous Davies, is now returning for a third series. Based on the novels by Leslie Thomas, the quirkily laid-back stories have received healthy viewing figures from an audience clearly saturated with more intense, blood-soaked police dramas.

"I'm genuinely proud that it has caught on, as it's an offbeat take on the traditional detective series and I was very happy to come back for a third time," says the former Central School of Speech and Drama graduate, whose birth name is Peter Moffett.

"I always thought there was space on the box for a series about an ordinary copper who has to deal with a variety of cases. It's gentle and funny but with dark moments. Dangerous is a good policeman but he has kind of missed the boat. He's not going to get promoted now and he's not a high flyer. Nonetheless, he's a community policeman who gets given the rotten jobs, which inevitably turn into the interesting ones."

Last year Davison added another small-screen hit to his impressive catalogue, the culture clash comedy-drama Distant Shores, in which he played cynical urban plastic surgeon Bill Shore, forced to relocate with his family to a remote rural fishing village; where he becomes the local GP. A second series starts filming in June.

"I guess nasty guys are the new trend — Doc Martin and so on, although Bill Shore isn't as bad as he seems," laughs Davison. "In a way, I suppose it harks back to the Braithwaites again, that kind of catapulted me back to fame after a lengthy gap. That was a fantastic chance to play an unpleasant character.

"It seemed they got me to play David Braithwaite because they thought he'd be unacceptably horrible, this man having an affair with his secretary. In that sense, At Home with the Braithwaites was a turning point for me and I suppose one thing does lead to another. A couple of years ago I did Too Good to Be True, in which I played Niamh Cusack's, not very nice husband and Distant Shores is a kind of follow-on."

Most recently, Davison has filmed a pilot episode for an ITV1 comedy-drama called Easy Peasy. "It's more quirky stuff and not your usual ITV fare," he says. "I play a child psychologist who's not , so great at dealing with his own son and suddenly he finds he has to look after him. They've got more storylines waiting in the wings but that all depends whether it is green-lit or not."