Who's to save the universe? The Doctor, proclaim sci-fi fans 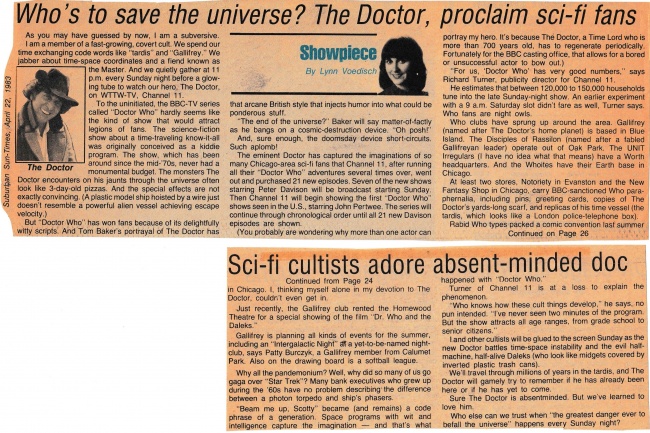 As you may have guessed by now, I am a subversive.

I am a member of a fast-growing, covert cult. We spend our time exchanging code words like "tardis" and "Gallifrey." We jabber about time-space coordinates and a fiend known as the Master. And we quietly gather at 11 p.m. every Sunday night before a glowing tube to watch our hero, The Doctor, on WTTW-TV, Channel 11.

To the uninitiated, the BBC-TV series called "Doctor Who" hardly seems like the kind of show that would attract legions of fans. The science-fiction show about a time-traveling know-it-all was originally conceived as a kiddie program. The show, which has been around since the mid-'70s, never had a monumental budget. The monsters The Doctor encounters on his jaunts through the universe often look like 3-day-old pizzas. And the special effects are not exactly convincing. (A plastic model ship hoisted by a wire just doesn't resemble a powerful alien vessel achieving escape velocity.)

But "Doctor Who" has won fans because of its delightfully witty scripts. And Tom Baker's portrayal of The Doctor has that arcane British style that injects humor into what could be ponderous stuff.

"The end of the universe?" Baker will say matter-of-factly as he bangs on a cosmic-destruction device. "Oh posh!"

And, sure enough, the doomsday device short-circuits. Such aplomb!

The eminent Doctor has captured the imaginations of so many Chicago-area sci-fi fans that Channel 11, after running all their "Doctor Who" adventures several times over, went out and purchased 21 new episodes. Seven of the new shows starring Peter Davison will be broadcast starting Sunday. Then Channel 11 will begin showing the first "Doctor Who" shows seen in the U.S., starring John Pertwee. The series will continue through chronological order until all 21 new Davison episodes are shown.

(You probably are wondering why more than one actor can portray my hero. It's because The Doctor, a Time Lord who is more than 700 years old, has to regenerate periodically. Fortunately for the BBC casting office, that allows for a bored or unsuccessful actor to bow out.)

"For us, 'Doctor Who' has very good numbers," says Richard Turner, publicity director for Channel 11.

He estimates that between 120,000 to 150,000 households tune into the late Sunday-night show. An earlier experiment with a 9 a.m. Saturday slot didn't fare as well, Turner says. Who fans are night owls.

Who clubs have sprung up around the area. Gallifrey (named after The Doctor's home planet) is based in Blue Island. The Disciples of Rassilon (named after a fabled Gallifreyan leader) operate out of Oak Park. The UNIT Irregulars (I have no idea what that means) have a Worth headquarters. And the Whoites have their Earth base in Chicago.

At least two stores, Notoriety in Evanston and the New Fantasy Shop in Chicago, carry BBC-sanctioned Who paraphernalia, including pins, greeting cards, copies of The Doctor's yards-long scarf, and replicas of his time vessel (the tardis, which looks like a London police-telephone box).

Rabid Who types packed a comic convention last summer in Chicago. I, thinking myself alone in my devotion to The Doctor, couldn't even get in.

Just recently, the Gallifrey club rented the Homewood Theatre for a special showing of the film "Dr. Who and the Daleks."

Gallifrey is planning all kinds of events for the summer, including an "Intergalactic Night" at a yet-to-be-named nightclub, says Patty Burczyk, a Gallifrey member from Calumet Park. Also on the drawing board is a softball league.

Why all the pandemonium? Well, why did so many of us go gaga over "Star Trek"? Many bank executives who grew up during the '60s have no problem describing the difference between a photon torpedo and ship's phasers.

"Beam me up, Scotty" became (and remains) a code phrase of a generation. Space programs with wit and intelligence capture the imagination — and that's what happened with "Doctor Who."

Turner of Channel 11 is at a loss to explain the phenomenon.

"Who knows how these cult things develop," he says, no pun intended. "I've never seen two minutes of the program. But the show attracts all age ranges, from grade school to senior citizens."

I and other cultists will be glued to the screen Sunday as the new Doctor battles time-space instability and the evil half-machine, half-alive Daleks (who look like midgets covered by inverted plastic trash cans).

We'll travel through millions of years in the tardis, and The Doctor will gamely try to remember if he has already been here or if he has yet to come.

Sure The Doctor is absentminded. But we've learned to love him.

Who else can we trust when "the greatest danger ever to befall the universe" happens every Sunday night?