Who's who among Who's friends 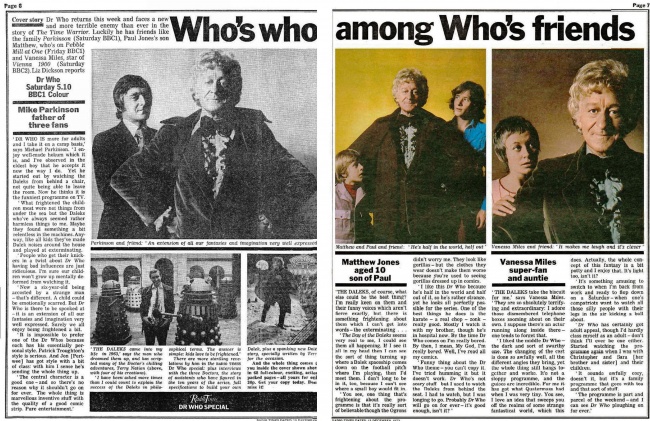 Cover story Dr Who returns this week and faces a new and more terrible enemy than ever in the story of The Time Warrior. Luckily he has friends like the family Parkinson (Saturday BBC1), Paul Jones's son Matthew, who's on Pebble Mill at One (Friday BBC1) and Vanessa Miles, star of Vienna 1900 (Saturday BBC2). Liz Dickson reports

'DR WHO IS more for adults and I take it on a camp basis,' says Michael Parkinson. 'I enjoy well-made hokum which it is, and I've observed in the eldest boy that he accepts it now the way I do. Yet he started out by watching the Daleks from behind a chair, not quite being able to leave the room. Now he thinks it is the funniest programme on TV.

'What frightened the children most were not things from under the sea but the Daleks who've always seemed rather harmless things to me. Maybe they found something a bit relentless in the machines. Anyway, like all kids they've made Dalek noises around the house and played at exterminating.

'People who get their knickers in a twist about Dr Who having bad influences are just ridiculous. I'm sure our children won't grow up mentally deformed from watching it.

Now a six-year-old being accosted by a strange man - that's different. A child could be emotionally scarred. But Dr Who is there to be spooked at - it is an extension of all our fantasies and imagination very well expressed. Surely we all enjoy being frightened a bit.

'It is impossible to prefer one of the Dr Whos because each has his essentially personal style. Patrick Troughton's style is serious. And Jon [Pertwee] has got style with a bit of class: with him I sense he's sending the whole thing up.

'The central character is a good one - and so there's no reason why it shouldn't go on for ever. The whole thing is marvellous inventive stuff with the quality of a good comic strip. Pure entertainment.'

'THE DALEKS came into my life in 1963,' says the man who dreamed them up, and has scripted many of the Doctor's chilling adventures, Terry Nation (above, with four of his creations).

'I have been asked more times than I could count to explain the success of the Daleks in philosophical terms. The answer is simple: kids love to be frightened.'

There are more startling revelations by him in the RADIO TIMES Dr Who special: plus interviews with the three Doctors, the story of assistants who have figured in the ten years of the series, full specifications to build your own Dalek, plus a spanking new Dalek story, specialty written by Terry for the occasion.

And the whole thing comes in you inside the cover shown above in 68 full-colour, exciting, action-packed pages-all yours for only 30p. Get your copy today. Don't miss it!

Parkinson and friend: 'An extension of all our fantasies an imagination very well expressed'

Matthew and Paul and friend : 'He's half in the world, half out Vanessa Miles and friend: it makes me laugh and it's clever '

'THE DALEKS, of course, what else could be the beat thing? I'm really keen on them and their funny voices which aren't fierce exactly, hilt there is something frightening about them which I can't get into words—the exterminating ...

'The Day of the Daleks seems very real to me, I could see them all happening. If I see it all in my head then I can see the sort of thing turning up where a Dalek spaceship comes down on the football pitch whore I'm playing, then I'd meet them. I don't long to be in it, too, because I can't coo where a small boy would fit. in.

'You see, one thing that's frightening about the programme is that it's really sort of believable though the Ogrons didn't worry me. They look like gorillas—but the clothes they wear doesn't make them worse because you're used to seeing gorillas dressed up in comics.

'I like this Dr Who because he's half in the world and half out of it. so he's rather strange. yet he looks all perfectly possible for the series. One of the best things he does is the karate — a real chop — zonk —really good. Mostly I watch it with my brother, though he's in hospital now. By the time Dr Who comes on I'm really bored. By then, I mean, My God, I'm really bored. Well, I've read all my comics.

'Funny thing about the Dr Who theme—you can't Copy it. I've tried humming it but it doesn't work. Dr Who's not scary stuff but I used to watch the Daleks from behind the seat. I had to watch, but I was longing to go. Probably Dr Who will go on for ever — it's good enough, isn't it? '

'THE DALEKS take the biscuit for me.' says Vanessa Miles. ' They are so absolutely terrifying and extraordinary: I adore those dismembered telephone boxes zooming about on their own. I suppose there's an actor running along inside there—one tends to forget that.

'I liked the middle Dr Who—the dark and sort of swarthy one. The changing of the cast is done so awfully well, all the different angles they bring, yet the whole thing still hangs together and works. It's not a sloppy programme, and the guises arc incredible. For mo it has got what Quatermass had when I was very tiny. You see, I love an idea that sweeps you off the realms of some strange fantastical world, which this does. Actually, the whole concept of this fantasy is a bit potty and I enjoy that. It's light too, isn't it?

'It's something amusing to switch to when I'm back from work and ready to flop down on a Saturday — when one's compatriots want to watch all those silly people with their legs in the air kicking a ball about.

'It sounds awfully cosy, doesn't it, but it's a family programme that goes with tea and that sort of stuff

'The programme is part and parcel of the weekend — and I can see Dr Who ploughing on for ever.'