Who-Manoids Flip Over Their TV Hero 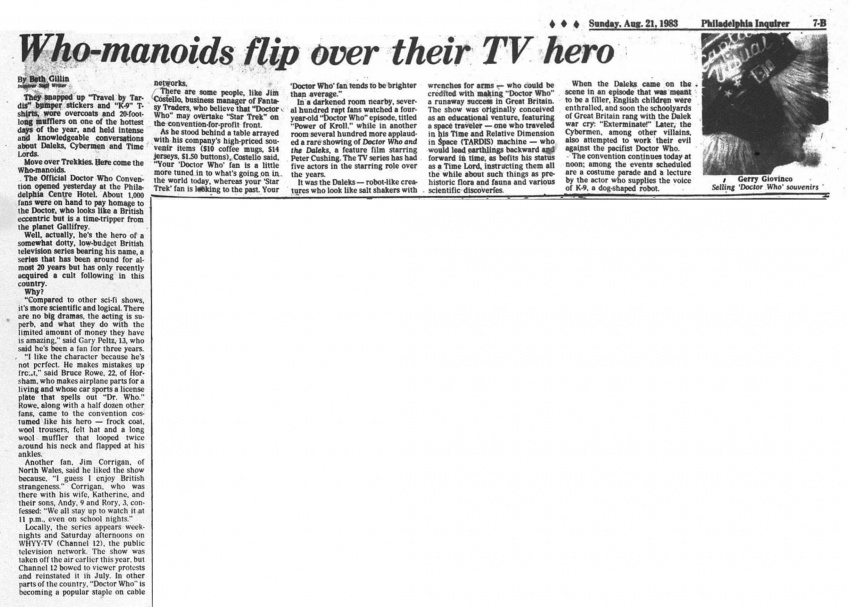 The Official Doctor Who Convention opened yesterday at the Philadelphia Centre Hotel. About 1,000 fans were on hand to pay homage to the Doctor, who looks like a British eccentric but is a time-tripper from the planet Gallifrey.

Well, actually, he's the hero of a somewhat dotty, low-budget British television series bearing his name, a series that has been around for almost 20 years but has only recently acquired a cult following in this country.

"Compared to other sci-fi shows, it's more scientific and logical. There are no big dramas, the acting is superb, and what they do with the limited amount of money they have is amazing," said Gary Peltz, 13, who said he's been a fan for three years.

"I like the character because he's not perfect. He makes mistakes up front," said Bruce Rowe, 22, of Horsham, who makes airplane parts for a living and whose car sports a license plate that spells out "Dr. Who." Rowe, along with a half dozen other fans, came to the convention costumed like his hero - frock coat, wool trousers, felt hat and a long wool muffler that looped twice around his neck and flapped at his ankles.

Another fan, Jim Corrigan, of North Wales, said he liked the show because, "I guess I enjoy British strangeness." Corrigan, who was there with his wife, Katherine, and their sons, Andy, 9 and Rory, 3, confessed: "We all stay up to watch it at 11 p.m., even on school nights."

Locally, the series appears weeknights and Saturday afternoons on WHYY-TV (Channel 12), the public television network. The show was taken off the air earlier this year, but Channel 12 bowed to viewer protests and reinstated it in July. In other parts of the country, "Doctor Who" is becoming a popular staple on cable networks.

There are some people, like Jim Costello, business manager of Fantasy Traders, who believe that "Doctor Who" may overtake "Star Trek" on the convention-for-profit front.

As he stood behind a table arrayed with his company's high-priced souvenir items ($10 coffee mugs, $14 jerseys, $1.50 buttons), Costello said, "Your 'Doctor Who' fan is a little more tuned in to what's going on in the world today, whereas your 'Star Trek' fan is looking to the past. Your 'Doctor Who' fan tends to be brighter than average."

In a darkened room nearby, several hundred rapt fans watched a four-year old "Doctor Who" episode, titled "Power of Kroll," while in another room several hundred more applauded a rare showing of Doctor Who and the Daleks, a feature film starring Peter Cushing. The TV series has had five actors in the starring role over the years.

It was the Daleks - robot-like creatures who look like salt shakers with wrenches for arms - who could be credited with making "Doctor Who" a runaway success in Great Britain. The show was originally conceived as an educational venture, featuring a space traveler - one who traveled in his Time and Relative Dimension in Space (TARDIS) machine - who would lead earthlings backward and forward in time, as befits his status as a Time Lord, instructing them all the while about such things as prehistoric flora and fauna and various scientific discoveries.

When the Daleks came on the scene in an episode that was meant to be a filler, English children were enthralled, and soon the schoolyards of Great Britain rang with the Dalek war cry: "Exterminate!" Later, the Cybermen, among other villains, also attempted to work their evil against the pacifist Doctor Who.

The convention continues today at noon; among the events scheduled are a costume parade and a lecture by the actor who supplies the voice of K-9, a dog-shaped robot.