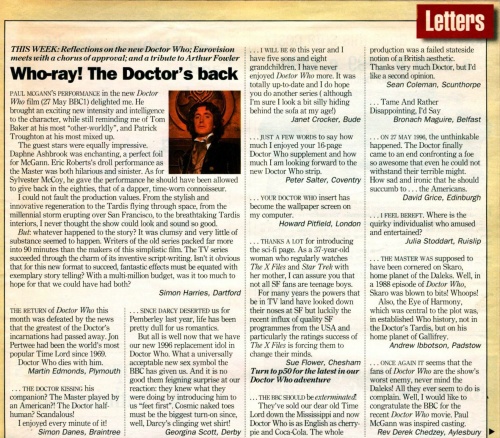 THIS WEEK: Reflections on the new Doctor Who; Eurovision Ineets with a chorus of approval; and a tribute to Arthur Fowler

PAUL MCGANN'S PERFORMANCE in the new Doctor Who film (27 May BBC1) delighted me. He brought an exciting new intensity and intelligence to the character, while still reminding me of Tom Baker at his most "other-worldly", and Patrick Troughton at his most mixed up.

The guest stars were equally impressive. Daphne Ashbrook was enchanting, a perfect foil for McGann. Eric Roberts's droll performance as the Master was both hilarious and sinister. As for Sylvester McCoy, he gave the performance he should have been allowed to give back in the eighties, that of a dapper, time-worn connoisseur.

I could not fault the production values. From the stylish and innovative regeneration to the Tardis flying through space, from the millennial storm erupting over San Francisco, to the breathtaking Tardis interiors, I never thought the show could look and sound so good.

But whatever happened to the story? It was clumsy and very little of substance seemed to happen. Writers of the old series packed far more into 90 minutes than the makers of this simplistic film. The TV series succeeded through the charm of its inventive script-writing. Isn't it obvious that for this new format to succeed, fantastic effects must be equated with exemplary story telling? With a multi-million budget, was it too much to hope for that we could have had both?

THE RETURN of Doctor Who this month was defeated by the news that the greatest of the Doctor's incarnations had passed away. Jon Pertwee had been the world's most popular Time Lord since 1969.

Doctor Who dies with him.

... THE DOCTOR KISSING his companion? The Master played by an American?! The Doctor half-human? Scandalous!

I enjoyed every minute of it!

... SINCE DARCY DESERTED us for Pemberley last year, life has been pretty dull for us romantics.

But all is well now that we have our new 1996 replacement idol in Doctor Who. What a universally acceptable new sex symbol the BBC has given us. And it is no good them feigning surprise at our reaction: they knew what they were doing by introducing him to us "feet first". Cosmic naked toes must be the biggest turn-on since, well, Darcy's clinging wet shirt!

... I WILL BE 60 this year and I have five sons and eight grandchildren. I have never enjoyed Doctor Who more. It was totally up-to-date and I do hope you do another series ( although I'm sure I look a bit silly hiding behind the sofa at my age!)

... YOUR DOCTOR WHO insert has become the wallpaper screen on my computer.

. .. THANKS A LOT for introducing the sci-fi page. As a 37-year-old woman who regularly watches The X Files and Star Trek with her mother, I can assure you that not all SF fans are teenage boys.

For many years the powers that be in TV land have looked down their noses at SF but luckily the recent influx of quality SF programmes from the USA and particularly the ratings success of The X Files is forcing them to change their minds.

Turn to p50 for the latest in our Doctor Who adventure

... THE BBC SHOULD be exterminated

They've sold our dear old Time Lord down the Mississippi and now Doctor Who is as English as cherry-pie and Coca-Cola. The whole

production was a failed stateside notion of a British aesthetic. Thanks very much Doctor, but I'd like a second opinion.

... Tame And Rather Disappointing, I'd Say

... ON 27 MAY 1996, the unthinkable happened. The Doctor finally came to an end confronting a foe so awesome that even he could not withstand their terrible might. How sad and ironic that he should succumb to ... the Americans.

... I FEEL BEREFT. Where is the quirky individualist who amused and entertained?

... THE MASTER WAS supposed to have been cornered on Skaro, home planet of the Daleks. Well, in a 1988 episode of Doctor Who, Skaro was blown to bits! Whoops!

Also, the Eye of Harmony, which was central to the plot was, in established Who history, not in the Doctor's Tardis, but on his home planet of Gallifrey.

... ONCE AGAIN IT seems that the fans of Doctor Who are the show's worst enemy, never mind the Daleks! All they ever seem to do is complain. Well, I would like to congratulate the BBC for the recent Doctor Who movie. Paul McGann was inspired casting.