Who Does The Doctor Fear The Most? Exuberant Fans 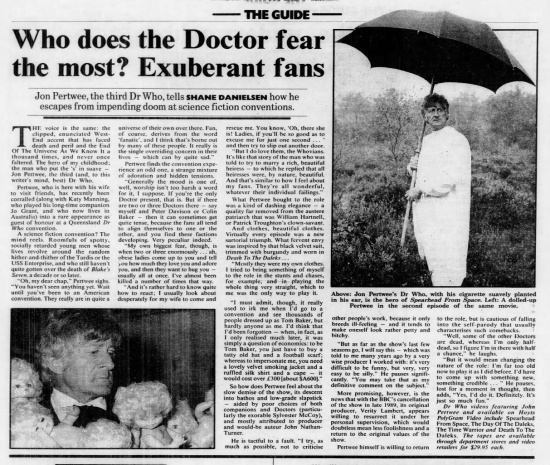 Jon Pertwee, the third Dr Who, tells SHANE DANIELSEN how he escapes from impending doom at science fiction conventions.

THE voice is the same: the clipped, enunciated West-End accent that has faced death and peril and the End Of The Universe As We Know It a thousand times, and never once faltered. The hero of my childhood; the man who put the 's' in suave — Jon Pertwee, the third (and, to this writer's mind, best) Dr Who.

Pertwee, who is here with his wife to visit friends, has recently been corralled (along with Katy Manning, who played his long-time companion Jo Grant, and who now lives in Australia) into a rare appearance as guest of honour at a Queensland Dr Who convention.

A science fiction convention? The mind reels. Roomfuls of spotty, socially retarded young men whose lives revolve around the random hither-and-thither of the Tardis or the USS Enterprise, and who still haven't quite gotten over the death of Blake's Seven. a decade or so later.

"Oh, my dear chap," Pertwee sighs. "You haven't seen anything yet. Wait until you've been to an American convention. They really are in quite a

universe of their own over there. Fan, of course, derives from the word 'fanatic', and I think that's borne out by many of these people. It really is the single overriding concern in their lives — which can by quite sad."

Pertwee finds the convention experience an odd one, a strange mixture of adoration and hidden tensions.

"Generally the mood is one of, well, worship isn't too harsh a word for it, 1 suppose. If you're the only Doctor present, that is. But if there are two or three Doctors there — say myself and Peter Davison or Colin Baker — then it can sometimes get quite tense, because the fans all tend to align themselves to one or the other, and you find these factions developing. Very peculiar indeed.

"My own biggest fear, though, is when two or three enormously ah, obese ladies come up to you and tell -you how much they love you and adore you, and then they want to hug you — usually all at once. I've almost been killed a number of times that way.

"And it's rather hard to know quite how to react; I usually look about desperately for my wife to come and rescue me. You know, 'Oh, there she is! Ladies, if you'll be so good as to excuse me for just one second ... ' and then try to slip out another door.

"But I do love them, the Whovians. It's like that story of the man who was told to try to marry a rich, beautiful heiress — to which he replied that all heiresses were, by nature, beautiful. And that's similar to how I feel about my fans. They're all wonderful, whatever their individual failings."

What Pertwee bought to the role was a kind of dashing elegance — a quality far removed from the austere patriarch that was William Hartnell, or Patrick Troughton's clown-savant.

And clothes, beautiful clothes. Virtually every episode was a new sartorial triumph. What fervent envy was inspired by that black velvet suit, trimmed with burgundy and worn in Death To The Daleks...

"Mostly they were my own clothes. I tried to bring something of myself to the role in the stunts and chases, for example, and in playing the whole thing very straight, which to me was the only way to play it.

"I must admit, though, it really used to irk me when I'd go to a convention and see thousands of people dressed up as Tom Baker, but hardly anyone as me. I'd think that I'd been forgotten — when, in fact, as I only realised much later, it was simply a question of economics: to be Tom Baker, you just have to buy a tatty old hat and a football scarf; whereas to impersonate me, you need a lovely velvet smoking jacket and a ruffled silk shirt and a cape — it would cost over £300 [about $A600]."

So how does Pertwee feel about the slow demise of the show, its descent into bathos and low-grade slapstick — aided by poor choices of both companions and Doctors (particularly the exorable Sylvester McCoy), and mostly attributed to producer and would-be auteur John Nathan-Turner.

He is tactful to a fault. "I try, as much as possible, not to criticise other people's work, because it only breeds ill-feeling — and it tends to make oneself look rather petty and bitchy.

"But as far as the show's last few seasons go, I will say this — which was told to me many years ago by a very wise producer I worked with: it's very difficult to be funny, but very, very easy to be silly." He pauses significantly. "You may take that as my definitive comment on the subject."

More promising, however, is the news that with the BBC's cancellation of the show in late 1989, its original producer, Verity Lambert, appears willing to resurrect it under her personal supervision, which would doubtless mean less foolishness and a return to the original values of the show.

Pertwee himself is willing to return to the role, but is cautious of falling into the self-parody that usually characterises such comebacks.

"Well, some of the other Doctors are dead, whereas I'm only half-dead, so I figure I'm in there with half a chance," he laughs.

"But it would mean changing the nature of the role: I'm far too old now to play it as I did before. I'd have to come up with something new, something credible ... He pauses, lost for a moment in thought, then adds, "Yes, I'd do it. Definitely. It's just so much fun."

Dr Who videos featuring John Pertwee and available on Hoyts PolyGram Video include Spearhead From Space, The Day Of The Daleks, The Time Warrior and Death To The Daleks. The tapes are available through department stores and video retailers for $29.95 each.

Caption: Above: Jon Pertwee's Dr Who, with his cigarette suavely planted in his ear, is the hero of Spearhead From Space. Left: A dolled-up Pertwee in the second episode of the same movie.