Who Knows Who? Jodie Whittaker (The Doctor) & Mandip Gill (Yaz) 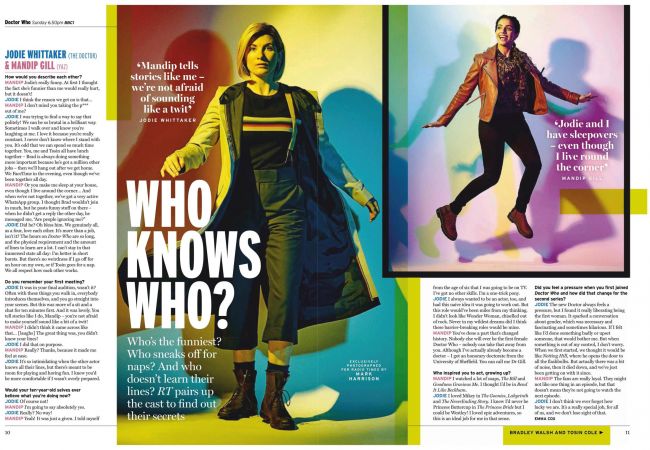 Who's the funniest? Who sneaks off for naps? And who doesn't learn their lines? RT pairs up the cast to find out their secrets

How would you describe each other?

MANDIP Jodie's really funny. At first I thought the fact she's funnier than me would really hurt, but it doesn't!

JODIE I think the reason we get on is that...

MANDIP I don't mind you taking the p*** out of me?

JODIE I was trying to find a way to say that politely! We can be so brutal in a brilliant way. Sometimes I walk over and know you're laughing at me. I love it because you're really constant. I never don't know where I stand with you. It's odd that we can spend so much time together. You, me and Tosin all have lunch together - Brad is always doing something more important because he's got a million other jobs - then we'll hang out after we get home. We FaceTime in the evening, even though we've been together all day.

MANDIP Or you make me sleep at your house, even though I live around the corner... And when we're not together, we've got a very active WhatsApp group. I thought Brad wouldn't join in much, but he posts funny stuff on there when he didn't get a reply the other day, he messaged me, 'Are people ignoring me?"

JODIE Did he? Oh bless him. We genuinely all, as a four, love each other. It's more than a job, isn't it? The hours on Doctor Who are so long, and the physical requirement and the amount of lines to learn are a lot. I can't stay in that immersed state all day: I'm better in short bursts. But there's no weirdness if I go off for an hour on my own, or if Tosin goes for a nap. We all respect how each other works.

Do you remember your first meeting?

JODIE It was in your final audition, wasn't it? Often with these things you walk in, everybody introduces themselves, and you go straight into your scenes. But this was more of a sit and a chat for ten minutes first. And it was lovely. You tell stories like I do, Mandip - you're not afraid to make yourself sound like a bit of a twit!

MANDIP I didn't think it came across like that... [laughs] The great thing was, you didn't know your lines!

JODIE I did that on purpose.

MANDIP Really? Thanks, because it made me feel at ease.

JODIE It's so intimidating when the other actor knows all their lines, but there's meant to be room for playing and having fun. I knew you'd be more comfortable if I wasn't overly prepared.

Would your ten-year-old selves ever believe what you're doing now?

JODIE Of course not!

MAN DIP Yeah! It was just a given. I told myself from the age of six that I was going to be on TV. I've got no other skills. I'm a one-trick pony.

JODIE I always wanted to be an actor, too, and had this naive idea it was going to work out. But this role would've been miles from my thinking. I didn't look like Wonder Woman, chiselled out of rock. Never in my wildest dreams did I think these barrier-breaking roles would be mine.

MANDIP You've done a part that's changed history. Nobody else will ever be the first female Doctor Who - nobody can take that away from you. Although I've actually already become a doctor - I got an honorary doctorate from the University of Sheffield. You can call me Dr Gill.

Who inspired you to act, growing up?

MANDIP I watched a lot of soaps, The Bill and Goodness Gracious Me. I thought I'd be in Bend It Like Beckham.

JODIE I loved Mikey in The Goonies, Labyrinth and The NeverEnding Story. I knew I'd never be Princess Buttercup in The Princess Bride but I could be Westley! I loved epic adventures, so this is an ideal job for me in that sense.

Did you feel a pressure when you first joined Doctor Who and how did that change for the second series?

JODIE The new Doctor always feels a pressure, but I found it really liberating being the first woman. It sparked a conversation about gender, which was necessary and fascinating and sometimes hilarious. If I felt like I'd done something badly or upset someone, that would bother me. But when something is out of my control, I don't worry. When we first started, we thought it would be like Notting Hill, where he opens the door to all the flashbulbs. But actually there was a bit of noise, then it died down, and we've just been getting on with it since.

MANDIP The fans are really loyal. They might not like one thing in an episode, but that doesn't mean they're not going to watch the next episode.

JODIE I don't think we ever forget how lucky we are. It's a really special job, for all of us, and we don't lose sight of that.