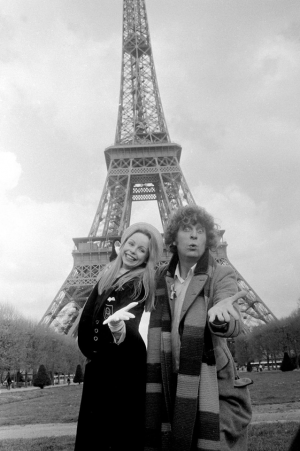 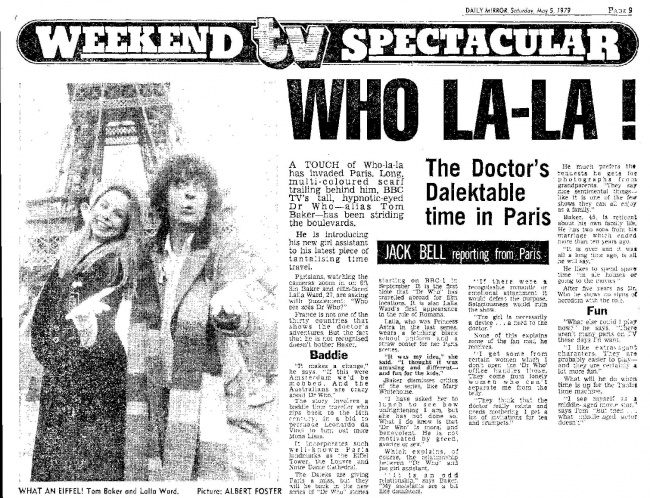 The Doctor's Dalektable time in Paris

A TOUCH of Who-la-la has invaded Paris. Long, The multi-coloured scarf trailing behind him, BBC TV's tall, hypnotic-eyed Dr Who—alias Tom Baker—has been striding the boulevards.

He is introducing his new girl assistant to his latest piece of tantalising time travel.

Parisians, watching the cameras zoom in on 6ft 3in and elfin-faced time that Lalla Ward, 27, are asking with puzzlement: "Who ees zees Dr Who?"

France is not one of the thirty countries shows the doctor's adventures. But the fact that he is not recognised doesn't bother Baker.

"It makes a change," he says. "If this were Amsterdam we'd be mobbed. And the Australians are crazy about Dr. Who.

The story involves a baddie time traveller who zips back to the 16th century in a bids to persuade Leonardo da Vinci to turn out more Mona Lisas.

It incorporates such well-known Paris landmarks as the Eiffel Tower, the Louvre, and Notre Dame Cathedral.

The Daleks are giving Paris a miss, but they will be back in the new series of "Dr Who" stories starting on BBC-1 in September. It is the first time that "Dr Who" has travelled abroad for film locations. It is also Lalla Ward's first appearance in the role of Romana.

Lalla, who was Princess Astra in the last series, wears a fetching black school uniform and a straw boater for her Paris scenes.

"It was my idea," she said. "I thought it was amusing and different-and fun for the kids.

Baker dismisses critics of the series, like Mary Whitehouse.

"I have asked her to lunch to see how unfrightening I am, but she has not done so. What I do know is that 'Dr Who' is moral and benevolent. He is not motivated by greed, avarice or sex."

Which explains, of course, the relationship between "Dr Who" and his girl assistant.

"It is an odd relationship," says Baker. "My assistants are a bit like daughters.

"If there were a recognisable romantic or emotional attachment it would defeat the purpose. Salaciousness would ruin the show.

"The girl is necessarily a device ... a need to the doctor."

None of this explains some of the fan mail he receives.

"I get some from certain women which I don't open, the 'Dr Who' office handles those. They came from lonely women who can't separate me from the telly.

"They think that the doctor really exists and needs mothering. I get a lot of invitations for tea and crumpets."

He much prefers the request he gets for photographs from grandparents. "They say nice sentimental things--like it is one of the few shows they can all enjoy as a family."

Baker, 45, is reticent about his own family life. He has two sons from his marriage which ended more than ten years ago.

"It is over and it was all a long time ago, is all he will say."

He likes to spend spare time in ale houses or going to the movies.

After five years as Dr. Who he shows no signs of boredom with the role.

"What else could I play now?" he says. "There aren't many parts on TV these days I'd want.

"I like extravagant characters. They are easier to play-and they are certainly a lot more fun."

What will he do when time is up for the Tardis time machine.

"I see myself as a middle-aged movie star," says Tom. "But then ... what middle aged actor doesn't?"

Caption: What an Eiffel! Tom Baker and Lalla Ward