Who are you, Whovians? 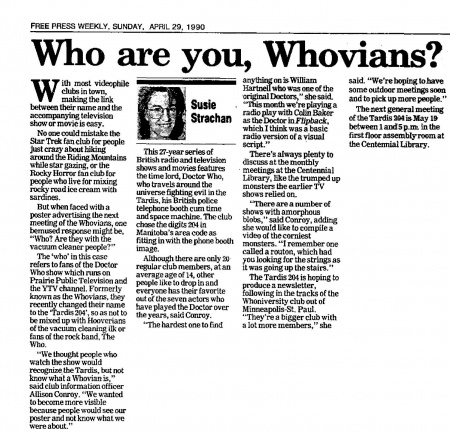 With most videophile clubs in town, making the link between their name and the accompanying television show or movie is easy.

But when faced with a poster advertising the next meeting of the Whovians, one bemused response might be, "Who? Are they with the vacuum cleaner people?"

The 'who' in this case refers to fans of the Doctor Who show which runs on Prairie Public Television and the YTV channel. Formerly known as the Whovians, they recently changed their name to the Tardis 204', so as not to be mixed up with Hooverians of the vacuum cleaning ilk or fans of the rock band, The Who.

"We thought people who watch the show would recognize the Tardis, but not know whit a Whovian is," said club information officer Allison Conroy. "We wanted to become more visible because people would see our poster and not know what we were about."

Although there are only 20 regular club members, at an average age of 14, other people like to drop in and everyone has their favorite out of the seven actors who have played the Doctor over the years, said Conroy.

"The hardest one to find anything on is William Hartnell who was one of the original Doctors," she said.. "This month we're playing a radio play with Colin Baker as the Doctor in Flipback, which I think was a basic radio version of a visual script."

There's always plenty to discuss at the monthly meetings at the Centennial Library, like the trumped up monsters the earlier TV shows relied on.

"There are a number of shows with amorphous blobs," said Conroy, adding she would like to compile a video of the corniest monsters. "I remember one called a routon, which had you looking for the strings as it was going up the stairs."

The Tardis 204 is hoping to produce a newsletter, following in the tracks of the Whoniversity club out of Minneapolis-St. Paul. "They're a bigger club with a lot more members," she said. "We're hoping to have some outdoor meetings soon and to pick up more people."

The next general meeting of the Tardis 204 is May 19 between 1 and 5 p.m. in the first floor assembly room at the Centennial Library.