Who doctors our science fiction club? 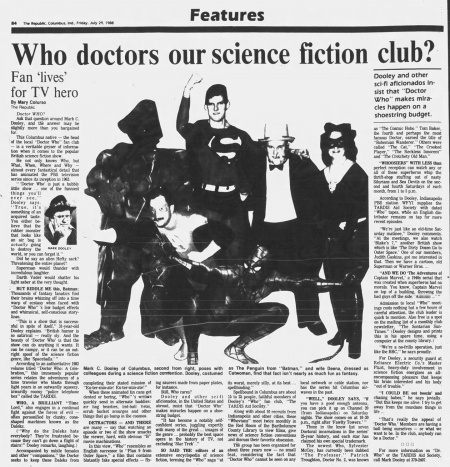 Ask that question around Mark C. Dooley, and the answer may be slightly more than you bargained for.

This Columbus native — the head of the local "Doctor Who" fan club — is a veritable geyser of information when it comes to the popular British science fiction show.

He not only knows Who, but What, When, Where and Why —almost every fantastical detail that has animated the PBS television series since its inception in 1963.

"'Doctor Who' is just a bubbly little show ... one of the funniest things you'll ever see," Dooley says. "True, it's something of an acquired taste. You either believe that the rubber monster that looks like an air bag is actually going to destroy the world, or you can forget it."

Did he say an alien Hefty sack? Threatening the entire planet?

Superman would thunder with incredulous laughter.

Darth Vader would shatter his light saber at the very thought.

BUT RIDDLE ME this, Batman: Thousands of fantasy fanatics find their brains whizzing off into a time warp of ecstasy when faced with "Doctor Who"'s low budget effects and whimsical, self-conscious story-lines.

'This is a show that is successsful in spite of itself," 31-year-old Dooley explains. "British humor is so satirical — really sly. And the beauty of 'Doctor Who' is that the show can do anything it wants. It can be campy. or it can be an outright spoof of the science fiction genre, like 'Spaceballs.'"

According to an authoritative 1983 volume titled "Doctor Who: A Celebration," this immensely popular series relates the adventures of a time traveler who blasts through light years in an outwardly squeezy, inwardly roomy "police telephone box" called the TARDIS.

WHO, A BRILLIANT "Time Lord," also engages in a continual fight against the forces of evil — often personified by clunky, cone-shaped machines known as the Daleks.

("Why do the Daleks hate everybody? They're frustrated because they can't go down a flight of stairs!" Dooley remarks, laughing.)

Accompanied by nubile females and other "companions," the Doctor seeks to keep these Daleks from completing their stated mission of "Ex-ter-min-ate! Ex-ter-min-ate!"

When these animated tin cans get dented or boring, "Who" 's writers quickly send in alternate baddies: air bag beasties, lint-ball Yetis, scrub bucket scourges and other things that go bump in the cosmos.

DETRACTORS — AND THERE are many — say that watching an episode or two of the show smacks the viewer, hard, with obvious "B" movie machinations.

In this view, "Who" resembles an English successor to "Plan 9 from Outer Space," a film that contains blatantly fake special effects — flying saucers made from paper plates, for instance.

Dooley and other sci-fi aficionados, in the United States and abroad, insist that "Doctor Who" makes miracles happen on a shoestring budget.

"It has become a notably self-confident series, juggling expertly with many of the great ... images of the genre ... probably the best space opera in the history of TV, not excluding 'Star Trek' ."

SO SAID THE editors of an extensive encyclopedia of science fiction, terming the "Who" saga "at its worst, merely silly, at its best ... spellbinding."

Spellbound in Columbus are about 15 to 25 people, faithful members of Dooley's "Who", fan club, "The TARDIS Aid Society."

Along with about 10 recruits from Indianapolis and other cities, these "Whovians" meet twice monthly in the Red Room of the Bartholomew County Library to view films, give news of science fiction conventions and discuss their favorite obsession.

The group has been organized for about three years now — no small feat, considering the fact that "Doctor Who" cannot be seen on any local network or cable station, nor has the series hit Columbus airwaves in the past.

Those in the know list seven Doctoral incarnations in the series' 25-year history, and each star has claimed his own special trademark.

The newest Who, Sylvester McCoy, has currently been dubbed "The Professor." Patrick Troughton, Doctor No. 2, was known as "The Cosmic Hobo." Tom Baker, the fourth and perhaps the most famous Doctor, earned the title of "Bohemian Wanderer." Others were called "The Cat," "The Crooked Player," "The Reckless Innocent" and "The Crotchety Old Man."

"WHOOSLERS" WITH I-FAS than perfect reception can watch any or all of these superheros whip the thrift-shop stuffing out of nasty Silurian and Sea Devils on the second and fourth Saturdays of each month, from 1 to 5 p.m.

According to Dooley, Indianapolis PBS station WFYI supplies the TARDIS Aid Society with dated "Who" tapes, while an English distributor remains on tap for more recent episodes.

"We're just like an old-time Saturday matinee," Dooley comments. "At the meetings, we also watch 'Blake's 7," another British show which is like The Dirty Dozen Go to Outer Space.' One of our members, Judith Gaskins, got me interested in that. Then we have a cartoon, old Superman or Warner Bros....

"AND WE DO 'The Adventures of Captain Marvel,' a 1940s serial that was created when superheros had no morals. You know, Captain Marvel on top of a building, throwing the bad guys off the side. 'Aiiiiiiii ... '"

Admission to local "Who" meetings costs nothing but a few hours of careful attention, the club leader is quick to mention. Also free is a spot on the mailing list of a monthly club newsletter, "The Sontarian Sun-Times." (Dooley designs and prints this in his spare time, using a computer at the county library.)

"We're a no-frills operation, just like the BBC," he says proudly.

For Dooley, a security guard at Reliance Electric Co.'s Master Plant, heavy-duty involvement in science fiction energizes an all-encompassing pleasure that keeps his brain interested and his body "out of trouble."

"I COULD BE out boozin' and chasing babes," he says jovially. "But this keeps me alive. I try to get away from the mundane things in life

"That's really the appeal of 'Doctor Who.' Members are having a ball being ourselves — or what we want to be. In the club, anybody can be a Doctor."

Caption: Mark C. Dooley of Columbus, second from right, poses with colleagues during a science fiction convention. Dooley, costumed as The Penguin from "Batman," and wife Deena, dressed as Catwoman, find that fact isn't nearly as much fun as fantasy.