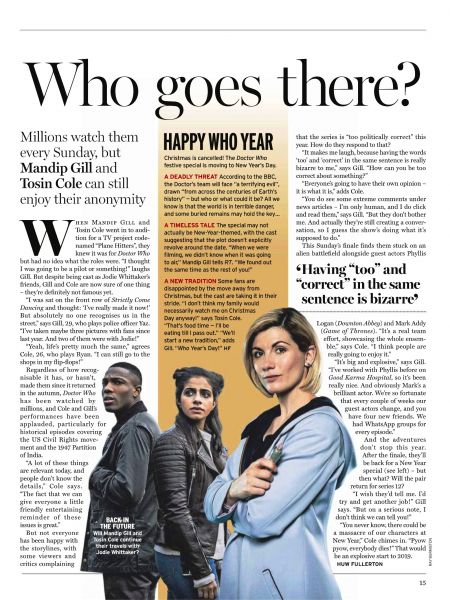 Millions watch them every Sunday, but Mandip Gill and Tosin Cole can still enjoy their anonymity

WTHEN MANDIP GILL and Tosin Cole went in to audition for a TV project code-named "Plane Hitters", they knew it was for Doctor Who but had no idea what the roles were. "I thought I was going to be a pilot or something!" laughs Gill. But despite being cast as Jodie Whittaker's friends, Gill and Cole are now sure of one thing - they're definitely not famous yet.

"I was sat on the front row of Strictly Come Dancing and thought: 'I've really made it now!' But absolutely no one recognises us in the street," says Gill, 29, who plays police officer Yaz. "I've taken maybe three pictures with fans since last year. And two of them were with Jodie!"

"Yeah, life's pretty much the same," agrees Cole, 26, who plays Ryan. "I can still go to the shops in my flip-flops!"

Regardless of how recognisable it has, or hasn't, made them since it returned in the autumn, Doctor Who has been watched by millions, and Cole and Gill's performances have been applauded, particularly for historical episodes covering the US Civil Rights movement and the 1947 Partition of India.

"A lot of these things are relevant today, and people don't know the details," Cole says. "The fact that we can give everyone a little friendly entertaining reminder of these issues is great."

But not everyone has been happy with the storylines, with some viewers and critics complaining that the series is "too politically correct" this year. How do they respond to that?

"It makes me laugh, because having the words 'too' and 'correct' in the same sentence is really bizarre to me," says Gill. "How can you be too correct about something?"

"Everyone's going to have their own opinion it is what it is," adds Cole.

"You do see some extreme comments under news articles - I'm only human, and I do click and read them," says Gill. "But they don't bother me. And actually they're still creating a conversation, so I guess the show's doing what it's supposed to do."

This Sunday's finale finds them stuck on an alien battlefield alongside guest actors Phyllis Logan (Downton Abbey) and Mark Addy (Game of Thrones). "It's a real team effort, showcasing the whole ensemble," says Cole. "I think people are really going to enjoy it."

"It's big and explosive," says Gill. "I've worked with Phyllis before on Good Karma Hospital, so it's been really nice. And obviously Mark's a brilliant actor. We're so fortunate that every couple of weeks our guest actors change, and you have four new friends. We had WhatsApp groups for every episode?'

And the adventures don't stop this year. After the finale, they'll be back for a New Year special (see left) - but then what? Will the pair return for series 12?

"I wish they'd tell me. I'd try and get another job!" Gill says. "But on a serious note, I don't think we can tell you!" "You never know, there could be a massacre of our characters at New Year," Cole chimes in. "Pyow pyow, everybody dies!" That would be an explosive start to 2019.

Caption: BACK IN THE FUTURE Will Mandip Gill and Tosin Cole continue their travels with Jodie Whittaker?

Christmas is cancelled! The Doctor Who festive special is moving to New Year's Day.

A DEADLY THREAT According to the BBC, the Doctor's team will face "a terrifying evil", drawn "from across the centuries of Earth's history" — but who or what could it be? All we know is that the world is in terrible danger, and some buried remains may hold the key...

A TIMELESS TALE The special may not actually be New-Year-themed, with the cast suggesting that the plot doesn't explicitly revolve around the date. "When we were filming, we didn't know when it was going to air," Mandip Gill tells RT. "We found out the same time as the rest of you!"

A NEW TRADITION Some fans are disappointed by the move away from Christmas, but the cast are taking it in their stride. "I don't think my family would necessarily watch me on Christmas Day anyway!" says Tosin Cole. "That's food time — I'll be eating till I pass out." "We'll start a new tradition," adds Gill. "Who Year's Day!"