Who knows where Peter will turn up? 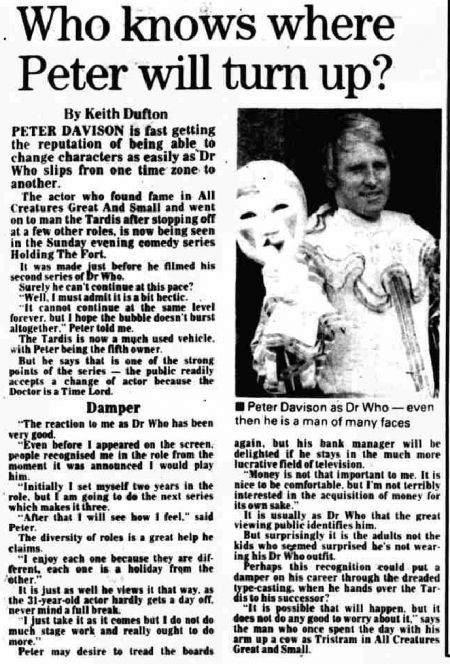 PETER DAVISON is fast getting the reputation of being able to change characters as easily as Dr Who slips iron one time zone to another.

The actor who found fame in All Creatures Great And Small and went on to man the Tardis after stopping off at a few other roles, is now being seen in the Sunday evening comedy series Holding The Fort.

It was made just before he filmed his second series of Dr Who.

Surely he can't continue at this pace?

"Well, I must admit it is a bit hectic.

"It cannot continue at the same level forever, but I hope the bubble doesn't burst altogether," Peter told me.

The Tardis is now a much used vehicle, with Peter being the fifth owner.

But he says that is one of the strong points of the series the public readily accepts a change of actor because the Doctor is a Time Lord.

"The reaction to me as Dr Who has been very good.

"Even before I appeared on the screen, people recognised me in the role from the moment it was announced I would play him.

"Initially I set myself two years in the role, but I am going to do the next series which makes it three.

"After that I will see how I feel," said Peter.

The diversity of roles is a great help he claims.

"I enjoy each one because they are different, each one is a holiday from the other."

It is just as well he views it that way, as the 31-year-old actor hardly gets a day off, never mind a full break.

"I just take it as it comes but I do not do much stage work and really ought to do more."

Peter may desire to tread the boards again, but his bank manager will be delighted if he stays in the much more lucrative field of television.

"Money is not that important to me. It is nice to be comfortable, but I'm not terribly interested in the acquisition of money for its own sake."

It is usually as Dr Who that the great viewing public identifies him.

But surprisingly it is the adults not the kids who seemed surprised he's not wearing his Dr Who outfit.

Perhaps this recognition could put a damper on his career through the dreaded type-casting. when he hands over the Tardis to his successor?

"It is possible that will happen, but it does not do any good to worry about it," says the man who once spent the day with his arm up a cow as Tristram in All Creatures Great and Small.