Whovians come out in force in support of their program 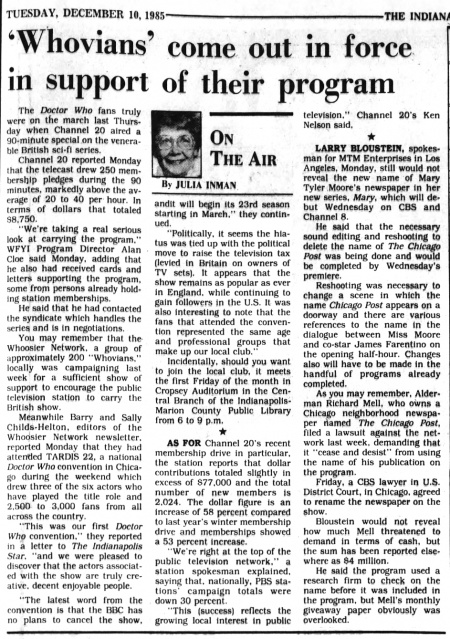 The Doctor Who fans truly were on the march last Thursday when Channel 20 aired a 90-minute special on the venerable British sci-fi series.

Channel 20 reported Monday that the telecast drew 250 membership pledges during the 90 minutes, markedly above the average of 20 to 40 per hour. In terms of dollars that totaled $8,750.

He said that he had contacted the syndicate which handles the series and is in negotiations.

You may remember that the Whoosier Network, a group of approximately 200 "Whovians," locally was campaigning last week for a sufficient show of support to encourage the public television station to carry the British show.

Meanwhile Barry and Sally Childs-Helton, editors of the Whoosier Network newsletter, reported Monday that they had attended TARDIS 22, a national Doctor Who convention in Chicago during the weekend which drew three of the six actors who have played the title role and 2,500 to 3,000 fans from all across the country.

"This was our first Doctor Who convention," they reported in a letter to The Indianapolis Star, "and we were pleased to discover that the actors associated with the show are truly creative, decent enjoyable people.

"The latest word from the convention is that the BBC has no plans to cancel the show, and it will begin Its 23rd season starting in March," they continued.

"Politically, it seems the hiatus was tied up with the political move to raise the television tax (levied in Britain on owners of TV sets). It appears that the show remains as popular as ever in England, while continuing to gain followers in the U.S. It was also interesting to note that the fans that attended the convention represented the same age and professional groups that make up our local club."

Incidentally, should you want to join the local club, it meets the first Friday of the month in Cropsey Auditorium in the Central Branch of the Indianapolis-Marion County Public Library from 6 to 9 p.m.