Why My Monsters are Marvellous 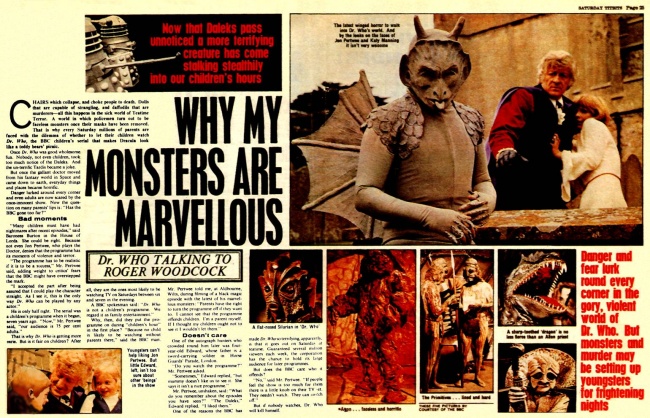 Dr. WHO TALKING TO ROGER WOODCOCK

Danger and fear lurk round every corner in the gory, violent world of Dr. Who. But monsters and murder may be setting up youngsters for frightening nights

CHAIRS which collapse, and choke people to death. Dolls that are capable of strangling, and daffodils that are murderers — all this happens in the sick world of Teatime Terror. A world in which policemen torn out to be faceless monsters once their masks hare been removed. That is why every Saturday millions of parents are faced with the dilemma of whether to let their children watch Dr. Who, the BBC children's serial that makes Dracula look like a teddy bears' picnic.

Once Dr. Who was good wholesome fun. Nobody, not even children, took too much notice of the Daleks. And the un- terrific Tardis became a joke.

But once the gallant doctor moved from his fantasy world in Space and came down to earth, everyday things and places became horrific.

Danger lurked around every corner and even adults are now scared by the once-innocent show. Now the question on many parents' lips is: "Has the BBC gone too far?"

"Many children must have had nightmares after recent episodes," said Baroness Burton in the House of Lords, She could be right. Because not even Jon Pertwee, who plays the Doctor, denies that the programme has its moments of violence and terror.

"The programme has to be realistic if it is to be a success," Mr. Pertwee said, adding weight to critics' fears that the BBC might have overstepped the mark.

"I accepted the part after being assured that I could play the character straight. As I see it, this is the only way Dr. Who can be played by any actor."

He is only half right. The serial was a children's programme when it began, seven years ago. "Now," Mr. Pertwee said, "our audience is 75 per cent adults."

That is why Dr. Who is getting more eerie. But is it fair on children? After all, they are the ones most likely to be watching TV on Saturdays between six and seven in the evening.

A BBC spokesman said: "Dr. Who is not a children's programme. We regard it as family entertainment"

Why, then, did they put the programme on during "children's hour" in the first place? "Because no child is likely to be watching without parents there," said the BBC man.

Mr. Pertwee told me, at Aldbourne, Wilts, during filming of a black magic episode with the latest of his marvellous monsters: "Parents have the right to turn the programme off if they want to. I cannot see that the programme offends children. I'm a parent myself. If I thought my children ought not to see it I wouldn't let them."

One of the autograph hunters who crowded round him later was four-year-old Edward, whose father is a sword-carrying soldier in Horse Guards' Parade, London.

"Do you watch the programme?" Mr. Pertwee asked.

"Sometimes," Edward replied, "but mummy doesn't like us to see it. She says it isn't a nice programme."

Mr. Pertwee, unshaken, said: "What do you remember about the episodes you have seen ?" "The Daleks," Edward replied. "I liked them."

One of the reasons the BBC has made Dr. Who so terrifying, apparently, is that it goes out on Saturday at teatime. Guaranteed several million viewers each week, the corporation has the chance to hold its large audience for later programmes.

But does the BBC care who it offends ?

"No," said Mr. Pertwee. "If people feel the show is too much for them there is a little knob on their TV set. They needn't watch. They can switch off."

But if nobody watches, Dr. Who will kill himself.

Youngsters can't help liking Jon Pertwee. But little Edward, left, isn't too sure about other 'beings' in the show

A flat-nosed Silurian in 'Dr. Who'

The Primitives ... lined and hard